I should point out that I couldn’t watch this film. Twenty minutes in and I hit the fast forward button, pressing play only when an action scene came up. 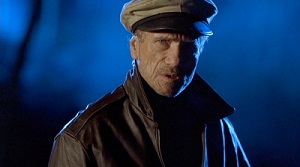 It’s really quite remarkable how bad this film is. House Of The Dead is based on the Sega video game, and the filmmakers don’t let you forget it, actually using footage from the video game to break up the scenes.

Just about everything is bad in this film. Bad script, bad acting, bad directing. Jürgen Prochnow is even here, assimilating everyone else’s terrible acting.

I know, I know. I should have guessed it would be like this… It is based on a video game, after all… And I should have smelt a rat (or rotting corpse?) when it appeared as a ‘Premiere Release’ on the video store shelves only one month after I saw the trailer at apple.com/trailers.

Speaking of which, House Of The Dead has a great trailer. It’s really quite incredible how much better than the actual film it is. Most of the kick-arse action I remembered from the trailer is actually quite boring in the film. They dabble in the technique that has been dubbed ‘bullet time’ since its use in The Matrix, except most of the time it appears they’ve just overcranked a single camera and played it in slow motion rather than have 360° of cameras set up.

I suppose it is a bit unfair that I review a film I didn’t watch in its entirety, but it’s about time we had a film with a score of 0 and 0 here. Harsh, you say? Well any film that can’t be watched must definitely be a bad film.

House of the Dead