The Wayan brothers have done everyone a service by stepping aside and handing over the Scary Movie franchise reins to Zucker and co. (responsible for The Naked Gun, et. al.). Whilst the original Scary Movie was fantastic (and fantastically gross), Scary Movie 2 has to be one of the worst sequels of all time (its only saving grace being James Woods’ appearance at the beginning).

Of course, along with Zucker and co. comes slapstick. It seems that falling over never falls out of fashion. They have stuck to what they’re best at, and almost completely ignored the gross-out humour that was so prevalent in SM1. 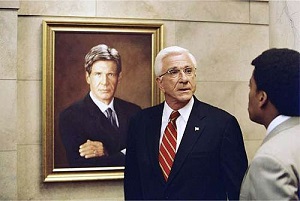 Anna Faris is fantastic as always. Honestly that gal cracks me up so much. (I laugh whenever I think of her ‘what are you waiting for?!’ tirade in SM1… unfortunately no one understands what I’m going on about when I quote it in public and then burst into hysterics.) It was good to see her in Lost In Translation, and hopefully there will be more roles on the way, as I’m convinced that such a great comedic performer has enormous potential as a dramatic actor. Charlie Sheen is also great, effectively reprising the type of role he was so good at in Hot Shots. His deadpan delivery of jokes that are so pathetic they’re funny is unequalled. Oh, and it seems that someone has reanimated Leslie Nielsen for this film (really, how OLD is he now?).

The film itself is a bit patchy. Like most comedies (and especially sight-gag comedies) it gets a bit tiring towards the end. There are some great take-offs of horror films this time around as well as (confusingly) some non-horror lampoons (why is 8 Mile included?).

On the DVD we get to see the original climactic scenes, which are completely different to the reshoot that was undertaken. Why on earth they ever thought that the original ending was funny is beyond me. Thank God for reshoots is all I can say.

This is a comedy that gets a high Hoopla Factor but a low rating… it all depends on who you see it with, and what state you’re in at the time. It’s still light years ahead of Scary Movie 2, though…

←In The Cut Autumn Spring→