Kevin Smith’s career has been a rocky one in terms of critical acclaim, but his fan base never seems to waiver, nor does his marketability. Making Clerks II was certainly a bold step, but I’m happy to say it was a successful one. 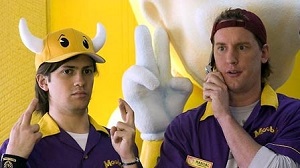 Dante and Randal are back in front of the camera, and even if the film this time around has a decent budget, and the stock is in colour, in some ways it feels like we’re right back there in 94 watching a couple of no-hopers pass the time serving a bunch of people they despise.

Clerks II is for me the most satisfying of Kevin’s films since the brilliant Chasing Amy. The comedy is narrative-driven, rather than loosely stitched together à la Dogma or Jay and Silent Bob Strike Back, and the laughs come thick and fast. It isn’t as dialogue heavy as the original, which is disappointing, but this is more than made up for by the introduction of new characters, namely Becky and Elias. Rosario Dawson (Rent) lights up the screen as Becky, and is so damn likeable you simply accept that this radiant woman would hang around slackers Dante and Randal. Relative unknown Trevor Fehrman is also perfect as the lovable dork Elias, obsessed with The Lord of the Rings and somewhat inexperienced when it comes to sex, not to mention females in general. He’s bound to have a huge career ahead of him. Jay and Silent Bob are relegated to supporting roles which is really where they are at their most effective, and Jason Mewes for one is looking a little more lucid now that he has cleaned up his act.

Whilst the film is centred on events rather than the never-ending conversations of the original, Smith still shows a flair for dialogue. Overall there’s something comforting about the film, which somehow propels the viewer back twelve years to when we hadn’t even heard of the man. The performances of the two leads are still occasionally stilted, but that’s part of the film’s charm.

Clerks II isn’t brilliant, but damn good entertainment, and certainly better than the title makes it sound. And what do you know? I went the whole review without mentioning Jersey Girl… Damn.

Ah, yes… the comfort of dipping back into a story unfinished since 1994, surrounding oneself with those fondly remembered rogues Dante, Randall, Jay and Silent Bob. What could be better?

It’s not like they’ve changed much either – apart from a bigger budget, these guys look, act and talk much as they did when we left them. 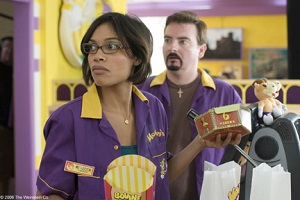 Their scripting is still brilliant and Smith still knows how best to mirror the ennui of the minimum wage clerk; those responsible for bad imitations like Waiting… should be ashamed by the ease with which Smith returns to this world.

All four of the main players are back on form in this instalment, and it is an absolute pleasure to see their interactions once more. Instantly nailing their characters, the leads seem to have never left these roles, and although they have physically aged, one could be forgiven for thinking Clerks II had taken up directly after Clerks, such is the sense of continuity of characterisation. It does help, obviously, that Kevin Smith and Jason Mewes have regularly returned to their Silent Bob and Jay in the years since Clerks, and Brian O’Halloran and Jeff Anderson have voiced their respective Dante and Randall for years in the animated television series, as well as in Jay and Silent Bob Strike Back.

Joining the familiar boys are Rosario Dawson and Trevor Fehrman. Dawson shines as the love interest, and brings the right mix of sass and charm to her role – her turn in Clerks II is surely one of her better performances. Fehrman is somewhat less successful, although he is given only the task of being Randall’s punching bag, and thus is afforded very little opportunity to show his range. Cameos by Ben Affleck and Jason Lee are welcome reminders of the long history of loyalty Smith has shown to his actors.

All of the returning stars and the joy of once again being around their characters provides Clerks II with inbuilt momentum, however several major distractions prevent it from being quite as successful as its predecessor. Too much time is spent on the Sexy Stud subplot, and the (almost) over-the-top schmaltz between Dante and Randall in the final act borders on alienating Smith’s core viewers, although he wins them right back again with the closing homage to Clerks. There are also scattered scenes of absolute brilliance, however, including a sparring match between Star Wars-loving Randall and two Lord of the Rings fans that brilliantly captures the essence of much of the inter-trilogy angst that prevails within fandom.

Clerks II isn’t perfect, and doesn’t quite match up to the original Clerks, but even with its limitations, it is far better than most of the current Hollywood comedic output. Offensive and charming at the same time, Clerks II is recommended for anyone who loved the original, or ever felt a sense of lacking direction.