Paul Greengrass’ powerful docu-drama retells the last hours leading up to the demise of United Flight 93, the only hijacked plane not to hit its intended target on September 11, 2001. The realism is heightened by the fact that the film is populated by a cast of relative unknowns, and excepting the occasional menacing musical cue there are no silver screen exaggerations. This is about the actions of the terrorists on board the plane, the experiences of the passengers and the response of air traffic controllers and the military – nothing else. It definitely isn’t about the why, only the what and how. 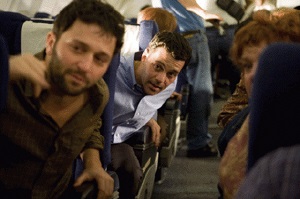 Now here’s the thing: there was no moment of this film I enjoyed. I don’t mean I wanted to be thrilled in a Hollywood-esque fashion – I simply did not benefit from United 93. For the majority of the film I felt ill and wanted to walk out. I’ve never been comfortable with re-enactments, usually they’re either unintentionally hilarious (think recreations of historical figures in TV docos), or in poor taste. What we have here is the ultimate in re-enactments. I’m not sure if it’s a case of ‘too soon’, though it does seem a little close for comfort.

Paradoxically, Sophie Scholl: The Final Days, which also deals with real-life horror, is currently my pick for best film of the year – though it is clearly a ‘drama’ and has more of a personal focus. Why was I okay with that and not United 93? And should I be ashamed? I’m not sure. Maybe I need a veil of ‘unreality’ in my cinema, or maybe it is simply too soon, but nevertheless I simply can’t ‘place’ this film. The last time I felt this way in a cinema screening was Dancer in the Dark, which was another truly harrowing (though fictional) experience.

I’m not entirely sure why this film was made. It might have been a tribute to those who died, though there’s nothing overly honourable about their representation. It might have been a condemnation of the woeful government and military response to this extreme situation, though it doesn’t suggest on whom the blame should be placed. At the end of the day we’re left with a recreation of something truly horrific. It left me feeling awful and empty. Though if someone were to ask me if any modifications should have been made to the true story, I would have said no.

Does this mean it shouldn’t have been made? I don’t know. A potent film, to be sure, but I would never sit through it again.

←Thank You for Smoking Clerks II→