I didn’t realise until the end credits that The Claim is actually based on ‘The Mayor Of Casterbridge’ by Thomas Hardy. The fact that this didn’t occur to me is strange to say the least, because I studied the book in high school. I didn’t particularly like the book (I thought it was a bit too long and boring), although often being subjected to BBC adaptations of classic novels can adversely affect one’s memory of a classic book. I fell asleep during the screening of Macbeth in literature class, right when he was seeing the ghost of his father at the dining table. All we see is an empty chair and Macbeth freaking out, but this was quite a disturbing thing to witness when half asleep. I quite enjoyed ‘Crime And Punishment’, and never actually saw an adaptation of this, so maybe that is the key to enjoying literature – don’t watch any BBC miniseries. 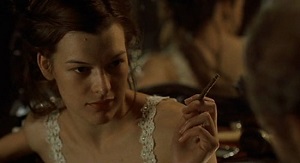 The Claim is quite obviously based on the Thomas Hardy novel (again, embarrassing that I didn’t notice) but thankfully is much more interesting than the BBC’s ‘Mayor Of Casterbridge’. The setting is stunning – this is definitely a film to see in widescreen. Beautiful snow capped peaks and period buildings and fashions. (When you don’t know anything about history it’s best to use the word ‘period’ – whilst not accurate, it’s not wrong, either).

I always love watching Sarah Polley – she is such a high calibre actor. She seems to have somehow grown younger in the years since Go, however. It’s also great to see Milla Jovovich in a dramatic role once again. She has more than once proven that she can be brilliant, but unfortunately when she gets paid a lot (Resident Evil, and the upcoming Resident Evil: Apocalypse) we see her as a two dimensional, standard Hollywood heroine. Bring back the days of The Fifth Element (‘Lee-loo Dallas multipass!’) and Million Dollar Hotel, I say. She was truly incredible in both those films, and much more than just a pretty face. She’s good in The Claim also, and at least gets to play a strong and assertive character.

This film is a bit long, but so are many films these days. The Claim is a good old fashioned period drama – it moves along slowly and shots linger on the actors for a long time. Old style cinema.