Harry Potter 3 is a marked improvement on its predecessors, but still fails to capture completely the spirit of the books.

I didn’t like HP1, and I thought HP2 was better, but still not that great. Thank goodness, HP3 is better again! Whilst none of the films has truly reflected the wonder I felt when reading the books the first time, at least this attempt goes closer than the last two. Our child stars are growing up. Harry, Hermione and Ron are all becoming much more powerful, and the actors are also learning more of their craft. Radcliffe still seems quite one dimensional, but Grint and Watson are really coming along. (What was Grint doing in Thunderpants??) Watson in particular is becoming quite an actor, and it wouldn’t surprise me if she is the first of the three to make it big in films after leaving Hogwarts. She seems to relish the freedom gained in the new darkness of HP3, allowing her to be sarcastic, violent, impulsive, impudent and much more individual. Her development has lead to her almost stealing this film away from her more prominent co-stars.

This film is darker, following the tonal change that occurs in the source texts. This darkness allows more freedom for the director, and Cuarón does an excellent job. His take on Hogwarts is much more interesting than Chris Columbus’ – some of the scenery and sets are quite amazing, and the directorial devices he employs, like showing the passing of the seasons in the behaviour of the Whomping Willow, are fun and fresh – and this is lucky as the moving staircases and animated portraits were becoming a little old. In fact, Cuarón delivers a visual style that was distinctly lacking in the first two films. The material is also more threatening, with murder, betrayal and terrorism. Harry is much further along in his personal journey, and has seen the dark side of the wizarding world, and the varied forces arrayed against him are now being revealed to him and us. The dementors are a fantastic creation, although they do seem distinctly modelled on Tolkien and Jackson’s Black Riders. Their menace is only slightly diminished by some poor effects.

The special effects are predominantly good, with Buckbeak the Hippogriff the best – the CGI for Buckbeak is exceptional. There are some less outstanding effects, the dementor face-sucking is the most obvious. I wonder how Stuart will feel about the climactic fight, given his reaction to the ending of Van Helsing!

The ensemble generally perform well, but Malfoy, Snape, McGonagall and Dumbledore are all minimally used, and are less effective for it – and where was Daddy Malfoy?? (Jason Isaacs was excellent in HP2, and hopefully will be back again.) Emma Thompson’s turn as Professor Trelawney didn’t quite hit the mark, especially in comparison to the excellent role played by Kenneth Branagh in HP2. Oldman is very good as Sirius Black, and David Thewlis is great as Lupin. We can look forward to more good work from them in subsequent films.

Whilst Harry Potter and the Prisoner of Azkaban is not wonderful, it is a marked improvement on ep’s 1 & 2, and if the trend continues we can look forward to some great cinema by the end of the series.

What a refreshing change this film is, not only in regards to the HP franchise but the whole category of big budget series plastered over our screens each year.

In many ways the first two HP films weren’t good films. Films and books are very different media. Most of the time people will rather the original book to the cinematic adaptation. It seemed that Chris Columbus tried to circumvent this phenomenon by simply putting a book to screen. 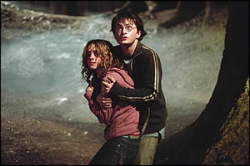 They were entertaining, yes, and had their moments, but were really just adaptations of books. The pacing was off, the films overlong. In many instances they also started to resemble the Star Wars prequels: packed with special effects and obsessed with exploring every single detail of the magical world, rather than focussing on the most important element: the story. With the third installment, Alfonso Cuarón and Steven Kloves have deliberately set out to make a good film. This meant chopping out huge chunks of Rowling’s tome-sized novel, and rather than detracting from the story, it enabled a more concise and enjoyable film to be made.

Alfonso Cuarón has made quite a few significant changes to the look of the film also. Not only do we see a much darker, scarier world, Hogwarts itself seems to have moved. It’s now nestled in amongst a group of mountain ranges, and has been severely redecorated. Hagrid’s cottage also looks nothing like it did in the first two. Cuarón has also succeeded where Columbus failed by bringing a unique visual and directorial style to the screen. Where Columbus employed a ‘point and shoot’ method in his films, some of the stylistic choices made in The Prisoner Of Azkaban are fantastic (although perhaps don’t cater so well for the younger audiences). 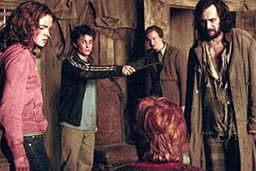 The acting is of a great standard all round, and Mark is right – Hermione gets the most interesting character moments. The adults are fine, although, again, as Mark said, none come close to Kenneth Branagh’s turn in The Chamber Of Secrets.

Unfortunately, like the first two, this film is let down by a less than thrilling climax. Since this has happened with all three, however, I would wonder if this was Rowling’s fault rather than the filmmakers’.

The Prisoner Of Azkaban is exciting and fast paced. Importantly, the magical world is also a little sparse in comparison to the two that came before. This is a blessing rather than a curse, as we are rewarded with a much more focussed and objective story. Above all, The Prisoner Of Azkaban is half an hour shorter than its predecessors (yay!). I wondered at times whether someone not familiar with the books would understand some of the concepts that whoosh by rather hastily, as this film doesn’t go out of its way to explain everything to the audience. This again makes me wonder if younger viewers enjoyed it as much as the previous two.

Oh, and the hippogriff is absolutely incredible… I have never seen a more realistic mythical creature.

So… a breath of fresh air, indeed.

Harry Potter and the Prisoner of Azkaban