That’s right people, I’ve been catching up on my Mandy Moore films! Now I know you’re all dying to hear what I think about this newest masterpiece from that Wholesome Blonde Gal, and you’ll be pleased to know that she has stuck to what she’s good at. 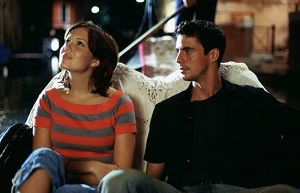 This is yet another romcom from Ms Moore, and this time one that’s a bit more lightweight than her previous outing How To Deal (and yes, before you complain, there are various levels of lightweight). The initial concept is the hardest part to get over – it’s not easy to feel sorry for the President of the United States’ daughter. But this bothersome thought was soon forgotten as the film picked up and I was treated to a nice, if lightweight (there’s that word again), romantic comedy.

There’s an entertaining subplot with Jeremy Piven and Annabella Sciorra, and these rather more experienced actors certainly show just how well they’re able to deal with this less than complex material.

There’s not much else to say about Chasing Liberty (other than the title, which complies to the rule that the combination of ‘verb, proper noun’ works a charm in making money apparently). And as much crap as I (and you) may give Moore, she is quite talented, even if she hasn’t had too much asked of her yet. She certainly has no trouble holding her own against Matthew Goode – although she whinges quite a bit and you wonder what he could possibly see in her. Okay, so I know what he can see in her, but you get what I mean.

This film almost lost a point just for including the song ‘Meet Me At The Love Parade’, although I was lenient since it was actually in context.