After the extended internet meltdown that was triggered by the announcement of this film, it’s nice to finally just sit down and watch the damn thing. Even better, it’s good to know that this remake is a lot of fun. 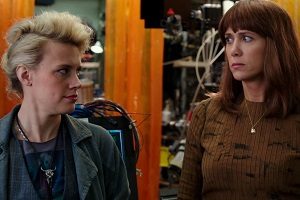 A bunch of paranormal scientists have to save New York from an otherworldly threat, you say? Well, it definitely sounds like a Ghostbusters movie. For me, this film felt a bit like a story from an expanded universe, which isn’t a bad thing at all. It’s not a beat-for-beat remake, but it is tethered to the original.

One of the aspects of the 1984 film that’s been talked about more and more over the years is the fact that, at the end of the day, it’s a movie about four friends. And this is something the remake understands. I love the fact that the story concerns a group of nerds who’ve been ignored, overlooked or picked on their entire lives, and that said nerds get to show up all the doubters. It’s also refreshing to see a film with multiple female characters who aren’t trying to undermine each other. If you think about films starring primarily women, chances are it’ll show them at each other’s throats. Even the hugely successful Bridesmaids fell for this.

The new cast are great. Melissa McCarthy’s charming and geeky Abby Yates was the most surprising for me – her performance here is positively restrained compared to a lot of her other work – and she is perfectly paired with Kristen Wiig’s Erin Gilbert. Leslie Jones was incredible as Patty Tolan every time she was on screen, and Kate McKinnon was, to be honest, a little disappointing. After seeing her hilarious ‘Saturday Night Live’ work, I kept waiting for her to let loose. Her character of Jillian Holtzmann is definitely the weirdest of the bunch, but not as extreme as expected. Finally, Chris Hemsworth’s Kevin is going to be divisive. I found his delivery hilarious, but he really inhabits the role – you’re not quite sure if he’s being funny funny, or if he simply didn’t understand the joke.

Feig’s film is a little bit scary, a little bit funny, with some great ghost effects. In essence, it’s much like the original film for me. It doesn’t feel like his other films, where the jokes come thick and fast, and the narrative has to make way for extended non-scripted gags.

I bought the DVD of the original Ghostbusters back in the day, and I recently upgraded it to Blu-ray, so it’s a mainstay of my collection. However, whenever I watch the movie as an adult, it’s never quite as funny as I remember. The script was only sparsely peppered with jokes, and it’s far more concerned with the story than landing a punchline every 30 seconds. Just like this remake.

When it comes to the visual effects, this film absolutely kills it. I loved the look of the ghosts, I loved all the fluorescent colours – something that worked a treat in the usually-too-dark-to-appreciate 3D. 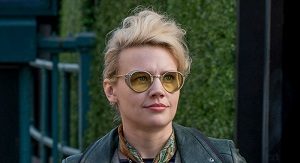 Bizarrely, the film appears to have a letterboxed presentation, because the visual effects (and sometimes even the actors) spill out onto the black bars at the top and bottom of the screen, something I’ve never before seen at the cinema. I’m not sure why this was done – perhaps to accentuate the 3D? – and no doubt many viewers won’t even notice, but it certainly shocked me.

So what’s doesn’t work with this film? First off, it feels a little stilted, and I got the feeling that there was a lot of material left on the cutting room floor. In fact, a scene played during the end titles proves this – some significant moments were ditched in post-production. And as much as I talk about the deliberate sparseness of the jokes, some of them fall flat.  Some geeks are also likely to be put off by the use of the ghostbusting technology, also.

The most annoying aspect of the film, however, was the constant references to the original. The cameos, the visual gags, the subtle nods…they drove me crazy. Every time it happened, I was pulled out of the film. They simply didn’t need to be there.

So at the end of the day, Ghostbusters 2016 is good fun. It’s got some amazing VFX, looks great in 3D, though the pacing is shoddy, particularly towards the end. But the charisma of the stars can’t be denied, and above all this is a great film about friendship between a bunch of people who can’t fit in, up against impossible odds.

Stuart talked about Ghostbusters 2016 on Chatflixpodcast.