Like many others, I was cynical when the early responses to Fallout appeared online – could this really be the fourth great Mission: Impossible film in a row? Well, as it turns out: yes. Very yes. 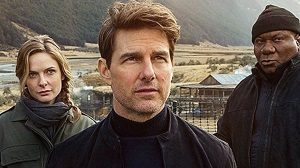 Christopher McQuarrie, the sometimes-brilliant, sometimes-naff writer is firing on all cylinders here. This is much more in the league of Rogue Nation, Edge of Tomorrow and Jack Reacher than it is The Mummy, Jack the Giant Slayer or The Tourist. In fact, this is very much a sequel to Rogue Nation (unsurprising, since it was the last M:I film) but also feels like the end of this second chapter of the franchise (films 3-6, that is.)

All the standard Mission: Impossible stuff is here. We have a plot that’s almost too complicated to follow, Hunt has no idea who to trust and the twists and turns appear as frequently as the action scenes. In fact, the approach to action here got me thinking about what’s been missing from big budget Hollywood recently. People complain about superhero movies’ over-reliance on VFX, but that’s not the problem. What’s missing from those films is tension. An awesome action scene is all about the set up; if there’s no tension along the way, the pay-off means nothing.

And Mission: Impossible has almost always been about establishing tension (except perhaps the second one). It’s something Christopher Nolan did exceptionally well in his Batman films, but has otherwise been missing from superhero films because they’re impatient to get to the bombastic stuff (see also The Meg.) The fact that very few other franchises are attempting this perhaps explains why Mission: Impossible has succeeded so consistently at the box office.

Cruise is his reliable self, getting younger by the day because of his alien DNA and/or deal with Satan and/or ability to time travel. There are a number of series regulars around him, but newbies Angela Bassett and Vanessa Kirby are welcome inclusions. Henry Cavill is good, but as with Jeremy Renner’s character in the previous two films, the filmmakers haven’t quite nailed the characterization of the “equally-capable offsider”. I’m not sure if there’s some pride there on Cruise’s part (he is also a producer, after all) or simply the fault of the writers, but they have yet to strike gold with someone Hunt can bounce off who isn’t comic relief or a love interest.

The only other criticism is that I saw all the twists coming. Don’t get me wrong – it didn’t ruin the experience – but an air of predictability hangs about the film.

As far as action goes, however, Fallout just blows the competition out of the water. It has one of the most insane climaxes of any action film I’ve seen in recent years, and yet it still manages to remain visceral and grounded. And lest I belabor the point: this is because it puts in all the hard work before the action hits.

One more thing: this is an example of a film with extensive reshoots (check out how many scenes from the original trailer are missing) that still came out of the gate swinging. Proof that reshoots don’t always spell disaster.

I think a lot of Hollywood could learn from these films. It isn’t a five-star script, but in terms of how to plan, properly pace, choreograph, shoot and edit an action movie, Fallout is hard to beat.

←The Meg The Predator→