Speaking of Season 3s, let’s look at another example of a show that’s strayed from its mission statement.

Season 2 of GLOW ended with the Gorgeous Ladies Of Wrestling taking up a permanent gig in a Las Vegas casino. This means that they’re doing the same show, over and over, every single night. Everyone feels like they’re stagnating, and for this reason, the writers of the show have decided to almost completely ignore the wrestling element altogether.

We don’t even see any proper wrestling until episode five. Instead, this season is determined to focus on some characters who’ve never been under the microscope. Gayle Rankin gets to finally flex her acting muscles as Sheila. Previously one-note (the woman who thinks she’s a wolf), this is the first time I feel like I understand who she is. It’s a similar story with Melanie (Jackie Tohn) and Jenny (Ellen Wong), who get possibly the most affecting scene of the entire season, as the writers examine the people behind the gimmicks. Carmen (Britney Young) and Arthie’s (Sunita Mani) relationship gets put through the wringer as well.

In some ways, it’s more of the same for our lead trio of Ruth (Alison Brie), Debbie (Betty Gilpin) and Sam (Marc Maron). Since their falling out is arguably the crux of Glow, we know that Ruth and Debbie can never become true friends until the final episode (or maybe never), so the dramatic gymnastics here are no surprise. And similarly with Sam – it’ll always be one step forward, one step back for the guy, because otherwise we’ll lose that which makes him so entrancing.

In fact, there are only really two characters left who haven’t had their time in the spotlight, and that’s Dawn (Rebekka Johnson) and Stacey (Kimmy Gatewood) – the two women who have been unfortunate enough to also be stuck with the least interesting gimmick. Oh, and Reggie (Marianna Palka), who continues to get so little to do that I didn’t even remember her name.

But in case you hadn’t realised by now, GLOW’s secret weapon is Bash Howard. 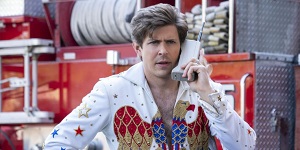 Chris Lowell, always destined to be runner-up in the ‘Veronica Mars‘ boyfriend game, is shockingly good in the role. Bash has more money than sense, yet his struggles with his domineering mother and his closeted sexuality mean that his childish naïveté is matched only by the tragedy that is his life. Poor little rich boy or not, the guy has issues.

And so, like Dear White People Season 3, we have a show that’s moved away from its own premise. If you’ve only been watching because of the wrestling element, then you’re going to be disappointed. If, however, you’ve formed an attachment to the characters like I have, then you’ll be happy to continue watching a show that’s now more about being an actor/woman/gay person/ethnic minority in 80s America than it is about wrestling.

As I understand it, GLOW used up the vast majority of the true story elements back in Season 1, perhaps because the creators didn’t believe it was going to run for this long. As one of the few well-publicised shows out there to feature a majority female cast, however, there are enough unique stories here to hold my attention.