All storytelling is based on conflict, and a series like Dear White People puts that conflict to front and centre, because, well, its characters have a lot to push back against. So what happens when everyone gets tired of the fight? Well, you get Season 3. 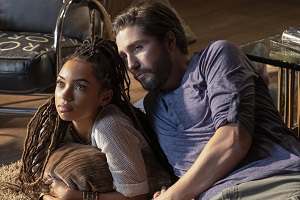 Never fear – the biting social commentary and incendiary dialogue is still present and accounted for, but as Season 3 opens, it seems the students of Winchester are having trouble staying angry. Samantha (Logan Browning) isn’t helming the titular student radio show or turning up to black caucus, and is instead focussing on her filmmaking work. Reggie (Marque Richardson) is also too distracted byhis studies to attend caucus. Lionel (DeRon Horton) is learning about and forging his new identity rather than honing his investigative journalism skills, and even Coco (Ashley Blaine Featherson) has been distracted from her political aspirations because of her own personal fears and regrets. The situation is best exemplified by Al’s (Jemar Michael) attempts to get his fellow students to sign a petition in episode 1. Everyone’s too busy or, many cases, simply exhausted by the outrage of the week.

If the show is a microcosm of the life of many an activist, perhaps this represents the characters in middle age with their own kids and mortgage, too busy with work to march in the streets to fight for the rights of others.

Don’t get me wrong, there are still razor-sharp observations to be had – the best of which is a jab at ‘The Handmaid’s Tale’ and its particular brand of white feminism; the most audacious of which is a self-referential criticism of third-season Netflix shows – but in many ways DWP is a shadow of its former self. To counter the disappointment, the characters are as interesting as ever, so although the season veers towards becoming a soapie, it’s still intelligent and fiercely intersectional.

I do wonder if this season was in the original planned outline for the show. The resolution to the shocking cliff-hanger from last season is dealt with in a perfunctory manner, and a couple of sub-plots are put on hold with the suggestion that the fourth, and final, season will pick them up next year.

As always, the show looks stunning. The cinematography is great, and the costuming and lighting has to be amongst the best currently on TV.

I wouldn’t say that Dear White People is running on fumes now, rather that it’s strange to see a more relaxed season. Gone is the urgency, the passion and the rage. Instead, we delve further into the personal lives of the characters. The self-referential jabs suggest this is all part of the plan, but I’d be lying if I said this season was just as compelling as the first two.