Long overdue, I’ve finally sat through the first half of Fullmetal Alchemist: Brotherhood, and I can see why the show was so damn popular. 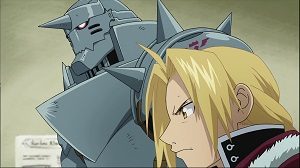 For those who don’t know, Brotherhood is the second anime adaptation of the popular manga. This version sticks closer to the source material than the first, however. The alchemist in question is Edward Elric (Romi Pak). In a classic Promethean move, Edward and his brother Alphonse (Rie Kugimiya) attempt to bring their mother back from the dead – with terrible consequences. Edward loses limbs in the process, whilst Alphonse’s body is utterly destroyed, leaving his soul imbued in a suit of armour. The two of them set out on a quest to undo the damage they did to their bodies, no matter what it takes.

The fantasy setting is reminiscent of Industrial Revolution-era Europe, whilst the military have uniforms could have been designed by Hugo Boss in the early 30s, if you know what I mean. Very quickly, the show establishes the rules for its magic. Taking its cue from alchemy, the powers are all about transmuting the essence of the elements around the caster, whether that be turning water to steam (granted, most of us use a kettle) or extracting the iron from blood to make metal weapons.

My initial thoughts on the opening few episodes were that the writing team knew exactly how to move things forward without filler, perhaps because this was a second shot at the story. But since discovering it’s practically a 1:1 adaptation of the manga, all credit should go to the creator, Hiromu Aarakawa.

This is shōnen anime but it doesn’t fall victim to the worst excesses of the genre. I feels like this is a result of having a female creator. There are many interesting and varied female characters, and so far I haven’t seen any egregious damselling. Considering that even the all-female studio Clamp seemed to confuse shōnen with ‘the female characters must be useless’ for a good portion of Tsubasa: Reservoir Chronicle, it’s impressive that Fullmetal Alchemist isn’t aimed at teenage boys purely at the expense of the women in the show.

The action explodes onto the screen. The show strikes a great balance between detailed animation and fluidity. It isn’t afraid to use deformations/chibis for the more comedic moments, either, which took a moment to get used to in the face of such a serious story.

I’ve spoken before about how I classify science fiction (taking a cue from Mary Shelley). 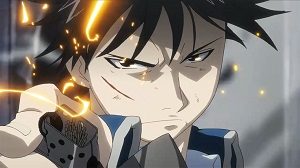 And Brotherhood is pretty much a literal reiteration of those themes. Time and again it speaks of man harnessing the power of God, and being punished for such hubris. As far as this collection goes, I don’t feel like they’ve got the humility bit down pat yet, as the Elric brothers are continually striving for new magical methods to regain their bodies.

The pacing, action, humour and visuals are all excellent in Brotherhood. This collection contains the first 35 episodes (along with commentaries) and as usual with Madman discs the visual and aural presentation is top notch. In fact, the only complaint I have is the arbitrary end point of the collection. Perhaps in an effort to make the two collections of equal size, this one stops abruptly, which is strange because there’s a natural narrative pause about six episodes earlier.

If, like me, you never got around to watching this show, now’s the time.

Fullmetal Alchemist: Brotherhood Part One is available now on Blu-ray DVD from Madman.