I don’t know what’s weirder: the fact that I’ve been waiting close to ten years for a movie based on Steve Alten’s ‘Meg: A Novel of Deep Terror’ or that I’m surprised the film isn’t very good. 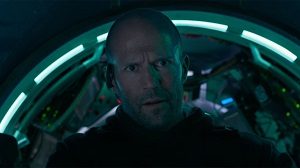 Alten’s novel was optioned by Hollywood for $2.1 million before it was even published; it must have been seen to be a sure-fire winner. And yet it’s taken 20 years to reach the screen. You can find the history of its development online, but I’ll save you some time: most of the roadblocks were budget-related. At one stage, a studio opted to move ahead with Deep Blue Sea instead. (Ironically, Deep Blue Sea 2 was released the same year that The Meg finally made it to the big screen…)

The fact that director Jon Turteltaub was hired to skipper the film says a lot; he’s a safe pair of hands. Phenomenon, two National Treasures, The Sorcerer’s Apprentice…they’re all serviceable yet forgettable films. In fact, to find his most memorable work, you probably have to go back to 1993’s Cool Runnings.

The second key to finally getting the film adapted was involvement from the Chinese film industry. (This is unsurprising, considering how popular the 2012 Australian shark flick Bait was over there).

For those who don’t know, Meg concerns a prehistoric megalodon that’s been hiding deep in the Mariana Trench. Thought extinct for 2 million years, this particular toothy critter is 60 feet long yet, given half the chance, seems to enjoy eating humans the most. The plot is a shadow of that which appeared in the book. It has the same central character in Jonas Taylor (Jason Statham) and the same general idea (big shark eats people) but that’s about it. Jonas’ ex-wife has gone from being a significant player to barely featuring (instead replaced by Li Bingbing’s Suyin) but the character interactions in Steve Alten’s book were mostly awful anyway, so I see it as an improvement. Jonas is also surrounded by an entertaining enough cast of characters (again, nothing like the book) though don’t expect to be stunned by any witty banter.

Rainn Wilson gets to act outside his comfort zone, whilst Cliff Curtis, Winston Chao, Ruby Rose, Robert Taylor, Page Kennedy, Ólafur Darri Ólafsson and Masi Oka all do what is required without breaking free of the lackluster script.

It may just be my knowledge of the budgeting woes that The Meg faced during 20 years of development, but the finished product feels like it cuts corners. 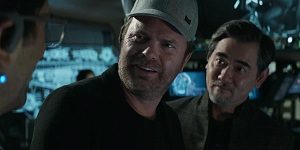 There are very few extended set pieces. Usually the beast appears, eats things and then we move to the next scene. Once Steve Alten got to book 3, ‘Primal Waters’, he was quite skilled at creating exciting and ridiculous action scenes. This movie, however, seems in such a hurry to get through the expensive moments that it doesn’t even spend time properly setting them up.

The Meg exists in a weird middle zone. It’s not a piece of finely-tuned tension like Jaws or The Reef, but it’s not as willfully silly as Deep Blue Sea. As a consequence, all three of those movies are better. We’re not in Mega Shark or Sharknado territory, but this is a definite missed opportunity. There are glimpses – mere glimpses – of a fun action film here. If the dialogue had been sharper, or the action scenes more memorable, we would have had a decent stupid shark movie. Instead, we have a bland stupid shark movie.