This is the Pixar sequel I’ve been longing for. So it’s with a heavy heart that I have to admit it’s nothing special.

That’s not to say I didn’t enjoy it – I had a great time at the cinema. But the story is bland, and there are a number of subplots that are hinted at but never come to fruition. 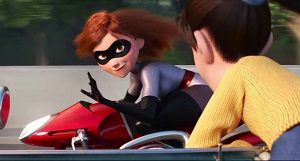 Opening only moments after the first film ended, Incredibles 2 sees the Parrs continuing to deal with the hazards of being a superhero family. They’re still homeless and supers are still illegal. When an opportunity comes their way, Helen/Elastigirl (Holly Hunter) and Bob/Mr Incredible (Craig T. Nelson) will find themselves having to deal with new challenges and responsibilities, not to mention an enemy they can’t see.

As you’d expect, Incredibles 2 looks fantastic. The 60s chic continues – aside from the odd contemporary haircut – and the animation is slick as can be. Once again, Brad Bird knocks the action scenes out of the park. The ease with which he lets the action beats flow, even at incredible speed, is truly inspiring. There are a number of new supers, and their powers are visually stunning. The comedic beats work well, and the film never gets boring.

So it’s sad to see that there’s not much going on beneath the generic superhero movie plot. There are zero surprises, and quite a few twists are signposted. I appreciate that this is a kids’ film, but Pixar have done better. There are no scenes that will become instant classics, and aside from being pure, unadulterated fun, Incredibles 2 doesn’t offer much.

It’s frustrating, considering we had to sit through two Cars sequels (and two Cars spin-offs) before we got a sequel to the film that had the most potential…only to have it disappoint. At the end of the day, the film’s core dynamic is old-fashioned. “Dad is bad at being a stay-at-home parent” isn’t the most original take. Even the mostly brilliant Inside Out had a problem with its dated depiction of the differences between men and women.

Look, if you’re excited for this film, by all means go out and see it. I really enjoyed an extra two hours with this super-powered family. Just don’t expect anything particularly clever or subversive.

←What Happened to Monday? Fullmetal Alchemist: Brotherhood Part One→