Just when you thought it was safe to go back into the supermarket, along comes a film like Bait. Its wonderfully idiotic plot is just the thing that monster movie lovers should rush to in droves: after a freak tsunami, survivors find themselves trapped in a flooded supermarket along with a 12 foot great white shark. 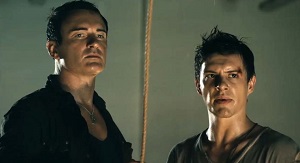 You don’t really need any more information, do you? Despite the fact that Bait passed up the opportunity to use the title ‘Sharks in a Supermarket’, it does have a number of other things going for it. Firstly, the sets are fantastic. We spend most of the running time in the supermarket and the car park beneath it, and the ‘destroyed’ locations look brilliant.

In a film like this (as with Shark Night), you’re not too worried about realism. The tsunami is made up of visual effects elements both good and bad, whilst the shark is successfully brought to life. The various severed body parts are gory enough, whilst the slow motion, CGI-assisted action is silly in a good way. In fact, all of the action is captured perfectly, which comes as no surprise when you realise that director Kimble Rendall worked as second unit director on the likes of the Matrix sequels, Ghost Rider, Knowing and The Killer Elite. (He also directed the Molly Ringwold starring horror flick Cut, but it’s best we all forget about that.)

The screenplay is patchy. Some scenes show real wit whereas others have characters delivering consistently dodgy lines. In an example of accidental synergy, the cast also provide performances of wildly different standards. I’ve never been impressed by Xavier Samuel, though he hasn’t been given much of a chance to do so. In The Loved Ones and The Twilight Saga: Eclipse, he barely spoke, whilst Road Train and A Few Best Men were awful, awful films. As Josh in Bait he’s simply Good Enough: nothing to write home about but successfully keeping the narrative afloat.

Some great actors surround him. Phoebe Tonkin is perfect as the rebellious Jaimie (the complete opposite of her role in Tomorrow, When the War Began), and Julian McMahon is solid in a role that’s never fully explained. Sharni Vinson does a decent job as the object of Josh’s affections, Tina, though the screenplay doesn’t give us many reasons to sympathise with her. Others let the film down considerably. There are a couple of characters whose deaths can’t come quickly enough, whilst the usually wonderful Dan Wyllie is, mystifyingly, way off the mark with his portrayal of Kirby.

All things considered, Bait is a good B-grade film that isn’t remotely scary. There are some flashes of genius (though the flick never gets cleverer than the premise itself) but there are also some truly cringe-worthy moments. Bait is a much better film than Piranha, though I’ll never understand how that mean-spirited and mind-numbingly boring US film found an audience (and indeed, a sequel). A sharper script would have made for a much better film, one that would have both embraced its inherent stupidity with glee and also come up with more interesting character interaction. Those wanting to actually be scared by a shark movie should look no further than 2010’s The Reef.

←The Awakening Searching for Sugar Man→