A mishmash of ideas that we’ve seen in science fiction many times over the years, Divergent manages to overcome its lack of originality thanks to good direction, strong performances and zippy pacing. 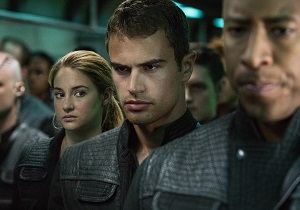 Set in a post-apocalyptic world where people are divided into factions in order to keep the populace subdued, Divergent feels a lot like The Hunger Games to begin with. We’re introduced to Beatrice (Shailene Woodley), a teenager who lives with her family in the Abnegation section of society, but feels like she doesn’t belong. Soon she’ll find herself bucking the system and forging her own path, rather than that which was chosen for her. Whether or not author Veronica Roth intended the book to be reminiscent of Suzanne Collins’ 2008 novel isn’t really the point; it’s clear that Hollywood decided to turn this into a film because of the success of The Hunger Games. After the first half hour, however, Divergent does, ahem, diverge from the template, skipping from one sci-fi trope to another, and it’s easy to see what made the book so popular with teenage readers.

We’ve got the traditional boarding school story set-up, complete with a Sorting Hat scene right out of ‘Harry Potter’. The ruthless way in which kids are trained also reminded me of Ender’s Game. Then there’s the fact that future-Chicago basically enforces the type of cliques you see in a traditional American high school (in fact, it’s got this whole Mean Girls meets Gattaca thing going on). And finally, we have the kind of wish fulfilment fantasy where the quiet, unassuming teen gets to surprise her family and peers to become a kick arse fighter complete with hot love interest (Theo James).

As unimpressive as I’ve made it sound, the film is definitely entertaining. Shailene Woodley was the best thing about The Descendants, and makes for a really charismatic heroine here. She is ably supported by the likes of Jai Courtney, Ashley Judd, Kate Winslet and Theo James, not to mention Zoë Kravitz, who looks exactly like you’d expect the child of Lenny Kravitz and Lisa Bonet to look.

I’m certain that Divergent is the kind of film that, when you stand back and look at the narrative as a whole, doesn’t make much sense. At the very least, future-Chicago features empty trains with no train stations to stop at, but aside from that, there’s something about the faction selection process that doesn’t ring true. I don’t want to pick holes, however, because as a brainless action sci-fi movie, Divergent works. I’ve seen three of director Neil Burger’s films (The Illusionist, Limitless and now this) and Divergent is the first one that doesn’t fizzle out during the final act.

←The Garden of Words Canopy→