Writer/director Aaron Wilson brings us Canopy, a brief wartime adventure that’s more Terrence Malick than Kokoda. Set in 1942, an Australian fighter pilot is shot down somewhere in the wilds of Singapore. With the war raging around him, he must find his way through the dense jungle to safety. Khan Chittenden, whom I haven’t seen since the likes of Clubland (Introducing the Dwights) and The Caterpillar Wish plays the unfortunate pilot, and gets to spend a lot of time taking in his muddy surroundings and hiding from enemy soldiers. When it comes to dialogue, however, he has very few lines to remember. 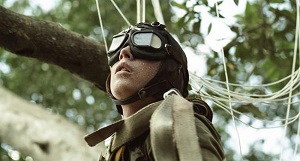 To make myself very clear: I was not a fan of Canopy. It must be said that I was expecting a very different film when I went in. Some early reviews had compared it to Gravity, and having recently seen the similarly themed All is Lost, I figured this would be the same deal – something goes wrong in the first few minutes, then our hero spends the rest of the film trying to get to safety. This was not the case. What should be a very simply case of conflict/resolution, conflict/resolution is anything but. Completely absent is any sense of escalation within the narrative. I wanted a bold, simple thriller; instead what I got was an 80 minute tone poem.

The film looks pretty good. The lighting is excellent, particularly in the night time scenes, and the few simple visual effects get the job done. The on location stuff in the jungles of Singapore is fantastic. Some strange choices are made in the cinematography department, however, and there were several occasions when I got a close-up of nothing whatsoever. The filmmakers did make a great decision not to feature any subtitles whatsoever, so whenever someone is speaking in another language, we’re thrust into the role of Chittenden’s character – alone and uncomprehending of what is going on around him.

After a dull first 15 minutes, I thought that proceedings would pick up once our fallen pilot bumped into another person (Tzu-yi Mo) lost in the jungle. I thought perhaps we’d have a kind of Enemy Mine thing going on, where two former enemies learn to trust each other and become brothers. Instead, Canopy simply became a film featuring two people stumbling through the jungle, seemingly without purpose.

Like I said earlier, perhaps I simply wanted a different kind of film. It has a dreamy, contemplative pace and the narrative feels completely directionless. An 80 minute movie should not drag. The most exciting thing about Canopy was its premise.