I’ve never read Orson Scott Card’s book, but after seeing Ender’s Game, it’s easy to see why it took such a long time for the 1985 novel to reach the screen. 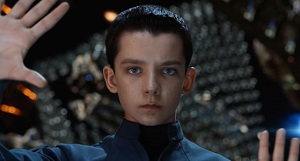 Set in 2086, the film focusses on young Ender Wiggin (Asa Butterfield), a student in Battle School. Here, kids are trained by the military in an effort to hone brilliant soldiers from a young age, in order to fight the alien race known as the Formics. Under the watchful eye of Colonel Hyrum Gruff (Harrison Ford), who has high hopes for the boy, Ender is put through a series of social, physical and psychological tests aimed at creating the perfect general.

The brilliance of Ender’s Game is that it’s such a simple story. There is only the barest smidge of subplots, and Ender himself features in 95 per cent of the film. Watching him go through each and every ordeal is fascinating, even if it’s akin to institutionalised psychological abuse. Butterfield is perfect in the title role, and his scenes with Ford are brilliant. This cinematic pairing is one of the best I’ve seen in ages, and their performances really complement each other.

As if Butterfield wasn’t enough, Hailee Steinfield and Abigail Breslin also feature. It’s like the who’s who of critically acclaimed young Hollywood talent, and they don’t go to waste. If you’re going to populate a serious, dramatic science fiction film with child characters, you need to make sure they’re up to the challenge.

The young cast is part of the adaptation issue I hinted at earlier. There are a number of things here that would have sounded great on the page, but have the overwhelming potential to look stupid on the big screen. And, more often than not, they do. First off we have zero gravity combat. I’m ecstatic that we finally have a film that addresses this (it’s always bugged me that Star Trek, Star Wars et al always feature spaceships on the same geometric plane, even though there’s no up in space) but the fact is seeing a bunch of kids floating through the air looks kinda silly. Then you’ve got ten year olds trying to look tough, which is very hard to get right. Finally, an important portion of the film occurs within a computer game sequence. The potential for things to go wrong is huge.

In my screening, the audience frequently found the film unintentionally hilarious. It’s just hard to pull off ‘cool’ when you’re watching a bunch of pre-teens in onesies firing lasers in zero g. Gavin Hood’s direction is pretty po-faced too, so there’s nowhere to hide. For me, I didn’t find such moments too distracting. I was able to mentally squint at the film, and look past the silliness to see the rather impressive story beats that were being hit.

Ender’s Game is a powerful tale, but it won’t be for everyone.