The two directors of the breakout hit, John Wick, were David Leitch and Chad Stahelski. Stahelski returned with the disappointing John Wick Chapter 2, so I was hoping that Leitch’s next film would blow me away. Alas, Atomic Blonde did not do that. 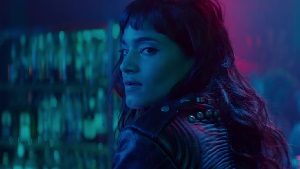 Charlize Theron plays Lorraine Broughton, an MI6 agent working in Berlin on the eve of the collapse of the wall. Regularly hopping from one side of Berlin to the other, she’s embroiled in a particularly complicated state of affairs. David Percival (James McAvoy) is another agent in deep cover, and together the two of them have to recover a piece of information that threatens to blow the actions of multiple foreign powers in the city wide open.

This was basically advertised as the female John Wick, and that sounded great. Charlize already stunned us with her action prowess in Mad Max: Fury Road (and years back, in Aeon Flux) so we knew she would be capable. Unfortunately this is one of her most underwhelming performances. She handles the action fine, but the rest of the time she’s saddled with delivering boring dialogue in a shonky English accent.

And it’s really boring. Every time we weren’t watching Lorraine beating people up, I struggled to pay attention. We’re never given a glimpse into her mind, so we don’t really know what she’s fighting for. Any narrative momentum is completely absent, so we’re left with a movie that looks really good, but does very little.

However, the action is incredible. Atomic Blonde makes up for the bizarrely bland action scenes we saw in John Wick 2, and whilst it doesn’t have as many minutes of arse-kicking, every single beat is a masterpiece of choreography, stunt work, tricksy editing and visual effects. There’s a 15-minute sequence where this film comes alive, only to have things grind to a halt immediately afterwards.

The soundtrack is on point too. There are a tonne of era-appropriate needle drops, but Tyler Bates’ score gets the job done too. As a frequent collaborator of Marilyn Manson’s, it’s unsurprising to see good ol’ Brian turn up here with a cover of Ministry’s “Stigmata”. The film oozes style – and Theron looks great smoking cigarettes under neon light – but style counts for nothing when you care not a jot for your protagonists, or when their story is so palpably dull. Atomic Blonde deserves to be added to a list of films that didn’t deliver on their potential.