To a certain extent, the original John Wick felt like the Little Action Movie That Could. With very little expectation on the part of audiences, it went on to become quite the hit, despite a budget a fraction of the size of your usual Hollywood blockbuster. I myself only caught up with the film subsequently on Blu-ray and had a great time. My only qualm was the fact that its first half hour was so darn good that the rest of the film was a bit of a letdown.  Chapter 2 continues this trend, alas. There’s nothing here that impresses in the same way that the original setup did, and for the most part, this film is an example of “more of the same.” 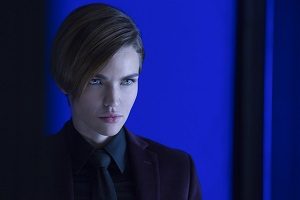 The dust hasn’t even settled from the events of the first film when Chapter 2 kicks in. John’s little murder spree has consequences, and local crime boss Santino D’Antonio (Riccardo Scamarcio) calls in a favour, requiring John to murder even more people in the face.

The secret-society-hiding-in-plain-sight aspect intensifies with this sequel. There are so many assassins standing on street corners that it’s a wonder there’s anyone left to kill. It wouldn’t be that extreme to suggest this is simply the action movie equivalent of pen-and-paper RPG “Vampire: The Masquerade” or even Neil Gaiman’s “Neverwhere.”

The performances are…middling. Keanu does his usual thing – 50% great, 50% awful, depending on the line – whilst Common impresses the most as another assassin. Ian McShane could play this role with his eyes closed whilst Riccardo Scamarcio is a good mix of smarmy and deadly serious. I spent a lot of the film so ready for Ruby Rose to kick some arse, but unfortunately was left disappointed.

The action is fine. No, actually, that’s not fair – it’s great. I can see why people like this: wide shots, locked-down camera, long takes. But the problem is Chapter 2 has nothing going for it when it comes to escalation – once you’ve seen the first fight in this movie, you’ve seen it all. Once or twice a potentially cool gimmick raises its head, only to be swept under the rug in favour of more punch-grapple-shoot-in-the-head moments. I’m okay with a simplistic plot and endless action scenes, as long as a filmmaker ensures there’s some kind of intensification.

Aside from some skilful, if dull, choreography and some great cinematography, John Wick Chapter 2 is a big disappointment.