The Conjuring movie franchise continues with Annabelle: Creation – the prequel to Annabelle, which was itself a spin-off/prequel to The Conjuring. Just to make things confusing, this film has ties to The Conjuring 2 also. Are you keeping up? Moral of the story: it’s becoming really, really hard to keep track of all these cinematic universes (I’ve already fallen behind with the Insidious films…) 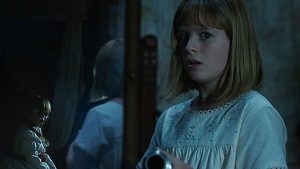 Where Annabelle was set in the 60s, Creation is set – for the most part – in the 50s, and attempts to explain how the evil doll became so dang evil. Twelve years after losing their daughter in a tragic accident, Samuel (Anthony LaPaglia) and Esther Mullins (Miranda Otto) take in a group of orphans under the care of Sister Charlotte (Stephanie Sigman). The Mullins’ house – a brilliant piece of set design – has enough secret doors, rooms-you-must-not-enter and spooky stained glass to put the girls on edge immediately. It’s not long before a malevolent presence in the form of the titular doll makes itself known.

Creation uses a lot of same tricks that the previous films (and the Insidious series) used with such aplomb. We catch barely-visible movements in dark shadows, lot of creepy noises just out of frame, and many, many jump scares. None of them come close to the eerie type of horror that the first Insidious film did so well, but I can’t deny that it’s effective, even when most of the scares are heralded by the soundtrack fading into silence.

Although I frequently knew a scare was coming, it still worked. So it’s hard to be too critical of the technique. The film goes a little bonkers in the final act, throwing everything it can at the screen (to varying levels of success), but this is a well-paced story that has a bunch of interesting characters.

The problem, however, seems to lie with the man at the helm. Lights Out director David F. Sandberg has his cast dialling it up to 11 every single moment they’re on screen. The editing leaves each significant story beat just that second too long also, almost like they’re leaving enough time to cut to an ad break. It feels more like a daytime soap than a feature film. I know LaPaglia and Otto are capable of much better performances, so I can only assume the actors aren’t to blame.

At the end of the day, this is certainly an improvement over the last film, in that it makes sense. It has none of the class of the main Conjuring films, however. Annabelle: Creation will work on those after some fun jump scares, but not for aficionados who ask for a bit more from their horror.