Cartoon Network continues to knock it out of the park with Over the Garden Wall, a ten-episode series that is truly sublime. 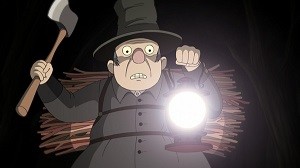 Any animation that attracts the likes of Elijah Wood, Christopher Lloyd, John Cleese and Tim Curry has to be good, amirite? Thing is, this show is so much more than celebrity cameos. It has the weirdness and charm of Adventure Time, but is also admirably restrained.

Over the Garden Wall concerns brothers Wirt (Wood) and Gregory (Collin Dean) and their journey home through a strange land. It mightn’t sound like much, but the show hits the ground running. Like the aforementioned Adventure Time, there’s no context as to what’s going on – the brothers are simply travelling. We meet a creepy woodsman (Lloyd), a talking bluebird called Beatrice (Melanie Lynskey – the other actress from Heavenly Creatures), anthropomorphic pumpkins, a ferry full of frogs and a young woman’s creepy guardian who goes by the name Auntie Whispers (Curry).

The show is pitch perfect in its delivery. As much as I love Adventure Time, it occasionally veers into weird-for-weird’s-sake territory, or feels like it’s deliberately punking its fans. This show, however, always feels sincere, no matter how absurd proceedings become. It’s just the right amount of whimsy, balanced out with the occasional beautiful and poetic moment. This is the kind of series that adults will enjoy too, and not because they’ve simply put in some naughty jokes that will fly over younger viewers’ heads; because it’s a really beautiful story well-told. Think of it as a kind of North American gothic fairy-tale meets European folklore, much like the work of Washington Irving.

The animation is absolutely beautiful. I’d recommend forking out the extra dosh for the Blu-ray (alas, my review copy was just a DVD) because it features a really neat aesthetic that makes me thankful TV hasn’t abandoned 2D animation, even if feature film producers have. It also contains a bevy of special features that aren’t on the DVD.

Over the Garden Wall is described as a mini-series – comprising only ten 10-minute episodes – and the narrative is serialised and completely self-contained. I can’t imagine there would ever be a second season. Though this means we only have a measly 110 minutes to enjoy, I think it’s better to leave the audience wanting more rather than let the show overstay its welcome.

This is easily amongst the best that Cartoon Network has to offer, and must for animation fans. Once you’ve watched it, check out this spoilerific video, which further goes to show the hidden complexity behind the ostensibly simple plot.

Over the Garden Wall is available now on DVD and Blu-ray from Madman.

←Terror in Resonance - The Complete Series The Jungle Book→

Over the Garden Wall