I’m not entirely sure what’s happened to Cameron Diaz. She was good in The Mask, great in There’s Something About Mary, and unrecognisably super in Being John Malkovich. But then there was Shrek (to be fair, I thought the whole movie was crappy, and I realise I may be making some enemies… ), and then a woeful turn in The Holiday. And now her hyperkinetic, shrill and annoying persona pops up again in What Happens in Vegas. 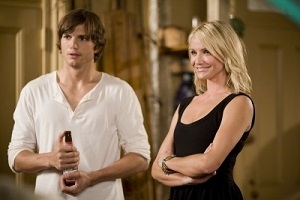 I don’t know why people seem to have trouble directing her, but she’s terribly over the top here. This isn’t a great film… or even a good one, but she still grates. Her performance does match the fit-inducing editing present in the first section of the film however, which serves to make global-warming Vegas even more garish. Ashton Kutcher fares a little better – he’s pretty funny – but the script doesn’t really aim any higher than cheap laughs. The stereotypes are present and correct – the man is an immature slacker who can’t commit, the woman is a stressed-out, overbearing type who can’t wait to tie the knot. Writer Dana Fox wasn’t straining too hard to come up with such archetypes, and who can blame her? The Apatow/Rogen films have made millions from manchildren.

The plot is almost screwball in its simplicity – two wildly different young people get married whilst off their faces in Vegas, inadvertently win 3 million dollars and then spend most of the film trying to get the money for themselves. This silly premise is great, though we all know that fairly soon some real romance will be in the air, no matter how hard they scheme against one another. Unfortunately Joy (Diaz) and Jack (Kutcher) spend so much time being nasty that it’s hard to really feel for them. In a way, they deserve each other, but that doesn’t make them endearing to us.

As with many comedies, it’s the supporting players that have the best lines. Rob Corddy and Lake Bell play Jack’s and Joy’s best friends, and get to have the most fun. Zach Galifianakis (whom I recognised from the Fiona Apple clip ‘It’s Not About Love’) has a small role as Dave, but doesn’t really get to shine.

If you’re not up for a challenge, What Happens in Vegas is funny enough. That the characters are so lazily created is a pity, as is the fact that the scenes during the end credits are actually the best of the film. It had potential…

←Josephine Baker: Black Diva in a White Man's World Made of Honour→

What Happens in Vegas…