That would have to be the single most relevant word in a description of Transformers. Throughout the 144 minute movie I was subjected to a relentless cacophony of stomping, scraping and crushing metal. The sound designers must have had the time of their lives (or lived through the worst of nightmares) getting this film primed for release. I don’t even want to know how many audio tracks they were working with before mixing down. A lot of the robotic manifestations rely on the sound, more so than usual considering the dizzying flurry of special effects. 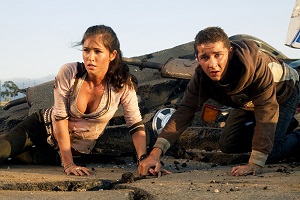 The robots do look pretty cool, and the transformations are nice, which is a pretty important part of the concept, I guess. When it comes to the actual action scenes, however, the film starts with a bang and never comes back down. There isn’t much sense of escalation, except for the fact that when it comes down to the final battle the robots yell out dialogue whilst pummelling each other, in that most gratuitous of cinema traditions that refuses to die. Often the visuals are too much. Mark, I’m sure, won’t be impressed. Other than the slow-motion shots, the robots’ movements all to often resemble a blur of metal sweeping past the camera.

This is a Michael Bay film, in case you didn’t realise with all the scenes filmed at sunset and bouncing, exploding cars, and I guess it is really the perfect (ahem) vehicle for his talents. Mammoth, loud and stupid is what Bay does best, and though I’ve never been his biggest fan, I can appreciate that he does it well. The sheer idiocy of the Transformers premise would be a disaster in anyone else’s hands, but somehow with Bay in control it all makes sense. Almost.

Shia LaBeouf is quickly becoming the saviour of the almost-shit movie. His performance in Disturbia was much better than the film itself, and in Transformers he somehow manages to make the dodgy lines and crappy exposition interesting, funny and even cool. Megan Fox, on the other hand, doesn’t do quite as well. Her character has nothing interesting to say, and whilst she might have the (FHM, Ralph, Zoo Magazine) looks, her character couldn’t be blander. About the only exciting thing about her are the ridiculous inconsistencies.

The adults are a mixed bunch. Josh Duhamel (looking suspiciously like Timothy Oliphaunt) does a good job, and you know exactly what kind of film you’re in whenever Jon Voight uses the phrase ‘DEFCON delta’. Then you have Rachael Taylor’s horribly grating super-Aussie accent (I swear Hollywood pitch shifts our actors) and two actors playing the same African American stereotype. (Three guesses as to which of the robots won’t make it to the end.) The entire cast does pretty well considering they probably had to do a lot of acting to invisible robots that wouldn’t come to be until post-production.

But is it any good? Well, yes and no. It’s deliriously dim-witted and full of awful scenes, bad dialogue and hardcore militarism (anyone who has a thing for modern weaponry will find this more than adequate stroke material)… but it also happens to be a lot of fun. I’ve always said that Armageddon is my most hated film, despite friends telling me I simply needed to chill out and enjoy the stupidity of it all – and maybe that’s what happened with Transformers. There’s something pure about an 80s kids’ cartoon created to sell toys – no pretension, just full-on capitalism – and this firmly grounds Bay’s work in the realm of the spectacle. Nothing more, nothing less than big, dumb fun. Noisy too.

Wow. After expecting so little from yet another Michael Bay film, it is easy for Transformers to get under your guard.

A children’s cartoon seemingly designed solely to sell toys hardly seems enough as the basis for a major feature film, and yet Transformers manages to pull it off. Mixing bad humour with frightening editing, our heroes – both human and Autobot – continue to maintain our attention… no small feat. Some of the script could be drawn from children playing with the toys in a sandpit, such is the banality of many of the utterances. 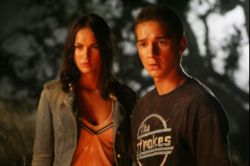 An alien race of intelligent robots, who can change form at will to become useful machines of human design like cars or jet fighters. An ancient power contained in a cube, that may hold the key to destroying the universe and must be found at all costs. And the boy who unwittingly holds the key to finding it. If it sounds ridiculous, it is, but the charm of LaBeouf and his mechanical buddies is such that one forgets the absurdly thin plot and ignores the massive flaws in logic. ‘Big dumb fun’ just about sums it up…

Which is not to say there aren’t a lot of problems; it’s just that there is so much everything on show. Loud, bright, long, and filled with CG wonders – you will gasp when you first see a yellow Camaro become a giant humanoid robot – Transformers typifies Michael Bay excess. The downsides – and there are many – include the rapid cutting and blurred CG imagery used in an attempt by ILM to trick the audience into thinking the Transformers are real. They just look so damn good, but we never get more than glimpses amongst the frequent pans and cuts. Often they are shown zooming past with never enough time to focus.

Given this is a Bay film about intelligent, building-sized, alien robots, the human characters are essentially window dressing, and although Shia LaBeouf is reasonable in the lead, he is alone in this regard. Megan Fox is basically awful as the romantic interest and Jon Voight struggles with some horrible scripting. Josh Duhamel is watchable in a fairly generic performance.

The true stars – and really what everyone came to see – are the Transformers, and they are pretty well animated, with the caveats abovenoted. Why an alien species of super-large robots would be humanoid in appearance is not clear, but that is just one of the many things best not worrying about. If you can leave your scepticism at the door, Transformers is a great ride.