Trainwreck is a problematic film. Here we have a delightful romantic comedy with charming yet dorky leads. On this level, the film definitely succeeds. But if held up as some kind of feminist take on the traditional Hollywood romcom, then it’s on shaky ground. 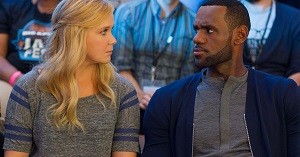 Writer and star Amy Schumer plays Amy, a woman who’s far too busy partying and hooking up with strangers to consider committing to a long-term relationship. Her sister, Kim (Brie Larson) is the antithesis, already married and with a young stepson. As soon as this was established, I began to worry: is Amy’s disinterest in being a mother or her busy sex life going to be ‘fixed’ come the film’s resolution?

The answer is yes and no. At no point do characters criticise her for either of these things, and Amy is a character who has agency and isn’t merely changing her ways to please other people. But at the same time, we have that title, Trainwreck, hovering over proceedings like some giant make-believe invisible judgey person (there’s got to be a better word for one of those…). In fact, the biggest problem with Trainwreck is that Amy clearly isn’t one. She’s on the writing staff at a big magazine, she regularly spends time with her family and generally seems to be enjoying life. She has a phobia about commitment, sure, but Amy doesn’t seem to have too many problems in her life.

As a simple romcom, the film is rather sweet. Bill Hader plays Aaron, a lovably dorky physician who becomes involved with Amy against her better judgment. Hader and Schumer have wonderful chemistry and it’s a joy to watch these two negotiate their way through a relationship. Some of the best scenes, however, feature Amy and her sister. These are wonderfully written moments, and the two feel like real siblings who love and hate each other in equal amounts.

The film is stuffed with endless cameos from famous people; some are successful (LeBron James), others less so (Matthew Broderick.) Director Judd Apatow has his usual struggle with keeping the film at a reasonable length, but at 125 minutes the film just scrapes through as acceptable. As a side note, anyone who’s seen the trailer will realise there was a tonne of footage left on the cutting room floor. Assume that the disc release will feature a much longer version.

There’s no denying Schumer’s fantastic screen presence, but the film feels muted. For someone who supposedly spends a lot of time drunk and/or high, we practically never see Amy doing any drugs. See Trainwreck if you’re interested in a charming and amusing romantic comedy, but not if you’re hoping to see something that’ll shake the foundations of the genre or of the Hollywood machine in general.