So the good news is that Sherlock Holmes isn’t as horrid as I’d feared. In fact, it’s quite an entertaining – if forgettable – Victorian romp.

There isn’t much in the way of mystery, which is a disappointment. Guy Ritchie’s Holmes spends much more time beating people up and dodging explosions than he does deducting. The film opens with the capture of Lord Blackwood (Mark Strong), a man who’s been dabbling in black magic and making sacrifices and whatnot, much to Scotland Yard’s chagrin. With Blackwood due to be executed, one would think that Holmes (Robert Downey Jnr) and Watson (Jude Law) deserve a bit of a rest (in fact, Watson has a permanent retirement from sleuthing planned, together with his soon-to-be fiancée, Mary (Kelly Reilly)). Unfortunately Blackwood’s diabolical scheming doesn’t end with his death, so the duo will soon find themselves embroiled in a dirty, steampunk-influenced race against time.

I’m not quite sure why modern retellings of Sherlock Holmes seem to require something extra (remember Young Sherlock Holmes, the book ‘Shadows Over Baker Street’, or the PC game ‘Sherlock Holmes and the Awakened’?) – don’t get me wrong, I like a bit of steampunk, devil worshipping and/or Lovecraft with my Victorian storytelling, however it does seem to miss the point of Conan Doyle’s creation.

The genre incursions are fine, really. Okay, so there’s a lot of action and a lot of mysticism, but the screenplay does do the characters justice. The main difference is that Holmes is a bit of a smug bastard (rather like James Bond), something which wasn’t overt in the original fiction – he was aware of his own limitations, rather than thinking himself a god amongst men. It is good to see that everyone in this film is clever, not just Holmes. All the characters seem highly intelligent and they fool Holmes more than once.

The costuming and recreation of London is fantastic. This is a really pretty film and it matches perfectly with Ritchie’s cinematic style. Hans Zimmer’s score is fantastic also – probably the best orchestral score of the year – and, of course, the performances are great. Everyone knew that Downey Jr. would make a great Holmes, and he does. Jude Law and Rachael McAdams are wonderful in their roles also. In fact the only thing lacking is the story.

Whilst watching Sherlock Holmes, I was really enjoying myself, but once it was over, there was nothing particularly memorable about it. The main problem is that it’s not very clever. There are one or two well-written moments, but apart from those, it might as well be The League of Extraordinary Gentlemen. Alright, so that was a bit harsh, but it is really just an action movie set in Victorian London. To top it all off, the filmmakers were waaaay too eager to let us know they wanted a sequel. It shoves the idea down our throats, actually.

Overall, Sherlock Holmes is a crowd pleasure and a well-written, nicely paced action movie. At least it proves that Guy Ritchie ha more than one good film in him. It mightn’t spit in the face of Conan Doyle per se, but it doesn’t include many of the elements that fans of the original fiction love.

Mired in the mess of editing clichés that betray this most modern version of the venerable franchise as ‘a Guy Ritchie film’, Sherlock Holmes features a confused and incomplete storyline and seems more like a preface to its inevitable sequels than a fully realised feature film in its own right.

Robert Downey Jr. stars as the titular detective, who in this incarnation is a depressed boor who doubles as a streetfighter and occasionally applies his significant intellect to solving crimes. 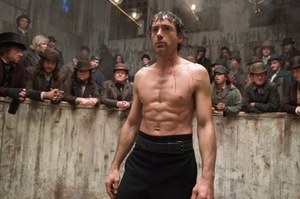 His long-time assistant Watson (Jude Law) is threatening to become engaged and leave Holmes’ service, and when former flame Irene Adler (Rachel McAdams) arrives on the scene Holmes must begin to unravel a complicated conspiracy and come to understand the machinations of the powerful forces of darkness threatening his city.

That this Sherlock Holmes spends much of its time on a plot featuring dubious supernatural overtones is a little disappointing, and that its denouement is the first time its audience is allowed to understand Holmes’ more rational and scientific take on events is a shame. Although there are hints of his superb logical mind displayed throughout, never is there an overriding sense of certainty in what Holmes and Watson are up against. Stuart has mentioned the ‘genre incursions’ he felt didn’t damage the film; however, one wonders whether for the first in this series of films it might have been better to remain a little more earthbound.

Holmes is played as arrogant and insensitive, and although Downey Jr. maintains his usual charm his character is a little harder to like than one might expect. Law is allowed a character who will generate far more empathy, with Watson stymied by his loyalty to his colleague and friend. His performance is probably the stronger of the two, although he has certainly been given the easier task. The supporting cast includes Rachel McAdams, who is delightful as always in a role that affords her very little opportunity to shine, and Mark Strong who nails his monotone bad guy, Lord Blackwood.

19th century London is believably and remarkably brought to life, in a film that focuses heavily on its underbelly. Lighting and cinematography permit very little light on affairs, such that it is frequently hard to see what is happening – particularly in scenes set in sewers or decaying buildings. The combination of set design and lighting achieves its intended effect, although one might hope for a sunnier day in the next instalment.

The parallels between this film and Jake Kasdan’s superb 1998 film Zero Effect are hard to ignore, and unfortunately Sherlock Holmes suffers by comparison. It is clear that Zero Effect draws much inspiration from the Sherlock Holmes character and oeuvre, however the performances, plotting and overall realisation of the filmmaker’s intent are much stronger. Viewers dissatisfied with this version of the Holmes character would do well to seek out Kasdan’s wonderful first feature.

Much of the fault for the failures of Sherlock Holmes must lie with director Guy Ritchie, who has filled his film with repetition and unnecessarily showy editing and camera-work, such that his audience is frequently pulled out of the experience of watching it. That it so blatantly angles toward sequels in its final act is a shame, and perhaps, if more restraint and focus had been brought to bear, a more enjoyable experience would have allowed any future instalments to be viewed with more hope.

←The Lovely Bones The Road→