One might have thought that one of the world’s most mediocre franchises was about to get a new lease on life. After all, it seemed that everyone was in agreement that it was a big mistake to make films two and three simultaneously (and without a completed script), and the four year breather before this latest instalment came along could only help matters, right? Then there’s the fact that they’ve ditched Knightley and Bloom – no one went along to the sequels wanting to see them, did they? Gore Verbinski is no longer in the director’s chair, which would again signal that this is a new phase in the franchise, and finally, there’s the guarantee that at least Johnny Depp will be fun to watch. 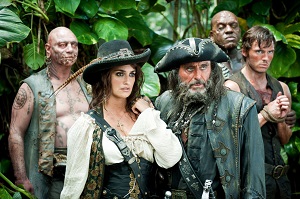 Strangely enough, these elements alone don’t give rise to a good film. The fact that Rob Marshall (he of the oh-so-average crowd-pleasers) is at the helm is a big mistake. From the opening moments, it’s clear that Marshall isn’t comfortable directing action. Whilst I’ve always been critical of the lacklustre action scenes in the Pirates movies (and in particular, Verbinski’s squandering of the all the promise he showed in Mousehunt), at the very least, Dead Man’s Chest had some truly great action set pieces. On Stranger Tides has plenty of action – indeed, you can set your watch alarm to go off every ten minutes in anticipation – but none of it is inspired. It’s not even a case of slipshod editing; you can see what’s going on, but none of it is interesting and there’s no rhythm to it.

The plot, if anyone cares, involves Captain Jack Sparrow (Depp), Captain Barbossa (Geoffrey Rush), newcomers Angelica (Penélope Cruz) and Blackbeard (Ian McShane) in a race against time to find the fountain of eternal youth. The Spanish Armada’s after the same thing too, but of course we all know that this is just another McGuffin, which would be fine if writers Ted Elliott and Terry Rossio had come up with some interesting things to happen along the way. Have they? Nup. Instead, we’re subjected to the same double and triple-crossing that plagued At World’s End, and none of it packs any emotional or comedic punch. The few clever ideas in the film are signposted ahead of time, so we can’t even enjoy these scant moments for what they are.

Depp does the best he can with the bland script, but Sparrow was never meant to be a lead character. Having him feature in almost every scene takes away from his madcap nature, and he doesn’t work as the narrative’s driving force. Whilst Knightley and Bloom may be absent, they’ve been replaced by another good looking young couple (Sam Claflin and Astrid Berges-Frisbey (from First Snow)) who, like the rest of the cast, are given nothing interesting to work with.

As with all the Pirates movies, there’s a bizarre reluctance to stay in the one place too long. 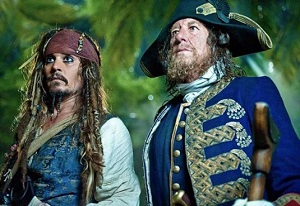 It’s a case of revealing a pretty set, fighting, then moving on – rinse and repeat. There’s no sense of the expedition taken to get from one place to another, which is strange when you consider that this is about pirates in sailboats in search of treasure – surely there were no quick commutes in the 18th century. Think of the entire second half of Indiana Jones and the Temple of Doom as a movie that gets this right – adventure films need a sense of place and some sort of challenging journey for our heroes. We shouldn’t simply be cutting from location to location without rhyme or reason.

The CGI is fine, though I’m sick of the Pirates movies being so darn dark – there’s no need for a swashbuckling adventure to get all gothic and shadowy. For the second time this year, I was fortunate to escape a 3D conversion and instead see a 2D session. The rest of you be warned: the 3D technology is bound to make the image even murkier.

I’ve never been a fan of this franchise; in fact, I thought the first film was dull and overrated at the best of times. On Stranger Tides does nothing to help the series reclaim the respect others had for it, however. In a word: yawn.

Pirates of the Caribbean: On Stranger Tides