The deliciously controversial and obstinate Lars von Trier returns with an epic, two part piece of cinema, Nymphomaniac. The two films apparently comprise the last in his ‘depression trilogy’, the previous being Antichrist and Melancholia, both of which also starred Charlotte Gainsbourg. 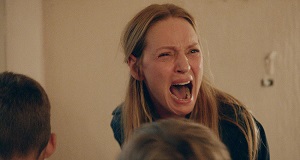 Nymphomaniac opens with the well-read Seligman (Stellan Skarsgård) stumbling across the beaten and bloody Joe (Gainsbourg) in an alley close to his home. She refuses an ambulance, so he takes her to his apartment. Here, the two begin talking and she recounts her life story.

Joe doesn’t have a very high opinion of herself. In fact, surprise surprise, her own self-loathing is rather epic. This shouldn’t astonish those familiar with von Trier’s work, since we’ve seen this type of lead female characters in the likes of Breaking the Waves and Dancer in the Dark, not to mention his previous two works. The good news is that, this time around, Joe is also a somewhat sympathetic character. I don’t know about other viewers, but I had trouble feeling for Gainsbourg’s ‘She’ in Antichrist. Here, her self-loathing is similar, in that it seems to be a direct result of the patriarchy, but at least we get to see her smiling, if only early in the piece.

Stacy Martin plays the teenaged Joe, and her presence lights up the screen. Indeed, much of Vol. I could be classified as a comedy. Her exploration of sexual desire throughout her youth is admittedly very clinical, but she does at least appear to be enjoying herself. This, in isolation, is enough to set Nymphomaniac apart from the bulk mainstream cinematic output. That we have a four hour, epic exploration of female sexuality is a rarity. The most recent film dealing with sex addiction I have seen would have been the Michael Fassbender-starring Shame, with which this film shares some tonal similarities.

The cinematography is a mixed bag. Comprising beautiful, high resolution images captured on film, gritty handheld camerawork and grainy stock footage, von Trier has done his usual thing: subverting visual cinematic traditions to his own benefit. It can be jarring, particularly when the scenes filmed in the present, set in a single room of Seligman’s house, look very much like a stage set, recalling the appearance of 2003’s Dogville.

Nymphomaniac Vol. 1 is episodic in nature, switching between amusing anecdotes from Joe’s youth to philosophical debates in the present between herself and Seligman, the latter of which become knowingly ridiculous. Like The Princess Bride did all those years ago, both of these characters often intrude upon the flashbacks, commenting on the nature of the storytelling, which makes for some nicely humorous moments.

The film features a huge supporting cast. Shia LaBeouf is probably the third most prevalent performer in the film, and he does a good job even if his version of an English accent is distracting. Of particular mention though is Uma Thurman, who absolutely owns the single scene in which she features.

If you generally like von Trier’s films but found Antichrist too gruelling, then this may be more your thing. The same can’t be said for Vol. II, however…