The first two Mummy films are part of my DVD collection for some reason, and I think that’s mainly because I bought them back when my purchasing knew no end. They were, and still are, entertaining films, and perhaps they filled that Indiana Jones hole in our hearts. Since then, Spielberg and Lucas provided us with another escapade, and that was on the whole pretty disappointing. In keeping up with Jones, Stephen Sommers’ creation comes back with a completely unnecessary sequel way too late. 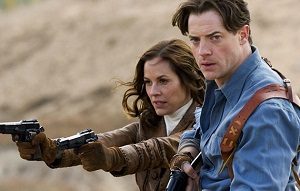 Sommers has (perhaps wisely) stayed away from directing since Van Helsing, but he’s here as producer, and I can’t really see how he could be happy with his creation. Because, you see, the main problem with Mummy 3 is that it is very badly made. Even ignoring the lame story this time around, it’s ultimately a very shoddy piece of filmmaking. The special effects are fine in isolation, though nothing to write home about, but they jar horribly with the live action. Again and again I saw a well-conceived special effects shot stuck next to a live action ‘reaction’ that was badly timed, poorly framed and totally unconvincing. The special effects shots stand out to such a degree that you could quite easily count them, and figure out where the editor had to cut corners. The actors clearly have no idea what they’re supposed to be looking at and each shot seems to have its own director, so that the tone of the film is terribly uneven. It almost feels like they poured all their concentration into those fantastical moments purely to fill up a 2 minute trailer, rather than enhance the film itself.

The story concerns an ancient Chinese emperor brought to life inadvertently, this time by Rick and Evelyn’s tomb-raiding son. It’s more of the same, though this wouldn’t really matter if it were fun. Jet Li plays the mummy this time around, though actually performs very little (usually represented in CGI), and perhaps the most notable performance is by Aussie Luke Ford, who makes the leap from The Black Balloon to big budget Hollywood action movie with ease. Brendan Fraser seems rather lacklustre, but so is the film, and the usually impressive Maria Bello has a terrible time stepping into Rachel Weisz’s shoes. She seems to swing between trying to mimic Weisz and putting her own spin on Evelyn, and it all ends up a bit of a mess. Michelle Yeoh manages to retain her dignity (as always) as an immortal witch, whilst John Hannah’s Jonathan is so lacking in dimension that he actually inverts time and space to create his own black hole of shitty characterisation.

I could go on about the many problems – the Mummy can shape shift but never seems to do so in sensible moments… random title cards hint at deleted scenes… hell, they can’t even do yetis right – but it’s not worth the effort.

The Mummy: Tomb of the Dragon Emperor