As if Hitman weren’t enough, we now have Max Payne – a shoot ’em up computer game adaptation featuring a previously talented actor in a bland and lifeless performance. 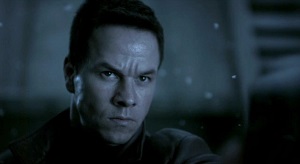 It seems that Sin City formed the visual template for this film, though the comparison isn’t fair to Robert Rodriguez’s 2005 flick. Whilst Max Payne takes the idea of noir and runs with it, bleaching all colours from the image, it also turns the contrast up to extreme levels. There are only two types of lighting – pitch black and stark white. It’s annoying, not classy, and constantly puts important parts of the action in shadow. It may have been a nice idea, but the execution is awful – and I can imagine anyone watching it on DVD would have massive trouble with ghosting of the image.

The story is nothing special. The introductory voiceover suggests the kind of blokey gumshoe delivery you might expect from Frank Miller, but the characters are drab and uninteresting. Max spends his days doing admin in the Cold Case unit, because – you guessed it – his wife and child were murdered years ago and the killer was never caught. Mark Wahlberg has always been talented – even in the worst of films – and in The Departed he showed just how brilliant he could be. The only direction he had here was apparently to ‘be taciturn’, which doesn’t really make for an interesting lead character. He plods from scene to scene, letting his facial muscles atrophy as supporting characters either flash him their private parts or try to knock him off (depending on their gender).

The special effects work well, though are conveniently hidden in all the black. Those expecting some cool winged angel animations á la Constantine will be disappointed. The film has fun in the final act, but it’s not really worth the effort of getting there. They put the camera on the gun at one stage, linking it to its video game roots, but – like Doom – it’s not enough.

A good opening weekend is all the studios were (are) ever after with this one, and I’m sure they got it. It was surprising to see Chris O’Donnell on the big screen again after what seems like such a long absence, but this action film doesn’t even boast much in the way of exciting action. Poor.