Hooplarians and friends of mine will be aware that I’m not exactly objective when it comes the films of M. Night Shyamalan. Unbreakable was brilliant, and Signs made it into my top ten; The Village was initially disappointing, but since being enlightened about its rather bold subtext I’ve come to appreciate it. When Lady in the Water was released in the US and received bad reviews I was prepared to ignore them. But then more bad reviews came out. And then more. And now that I’ve finally seen the film I think the best I can come up with is this:

Four out of five ain’t too bad. 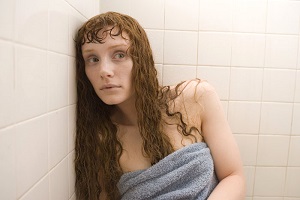 Like Shyamalan’s previous outings (and yes I’m not counting Praying with Anger or Wide Awake), Lady in the Water is still a brilliantly constructed film. Christopher Doyle’s cinematography is stunning, and illustrates perfectly how original Shyamalan’s ideas can be. The set design and special effects are great also. Paul Giamatti is brilliant in the lead role, as is Bryce Dallas Howard and the rest of the talented cast.

It’s the writing that lets it down. A hodgepodge of ideas, Lady in the Water doesn’t seem to have a clear focus. As the end credits rolled I was left wondering what the hell it was all about. It comes as no surprise that Disney disliked the film and that Warner Brothers had trouble marketing it. The trailer made it look like it had the same sort of horror potential as Signs or The Village, yet it isn’t really that scary. The poster proclaims it to be a ‘bedtime story’ though I can’t imagine it appealing to kids. I simply have no idea who the target audience is. The first half hour or so is rather entertaining and often humorous, though the animated prelude is utterly superfluous and acts only to suck the mystery out of the film by stating the premise from the beginning. And for the first time Shyamalan has a hard time shifting gears from horror to comedy, something he did so brilliantly in the last four movies.

I’m not even sure what the point of the film is. There are so many twists and turns that it certainly never gets boring, but it feels like a wild goose chase because the rules haven’t been stated at the beginning. Why do the occupants of The Cove all absorb this fantastical story with no qualms? The narrative simply makes no sense, and whilst this could be the point (a couple of scenes focus on Bob Balaban’s character’s obsession with generic storytelling) it simply doesn’t fly. Is it an anti-war film? Or about one man’s ability to let go of his past? Or is it simply a plea for us to reconnect with our childhood selves? The film tries to be all of those at once but in fact fails on each one.

Lady in the Water is predictable because Shyamalan has insisted on a type of storytelling that signposts the events ahead.

Rather than surprising us the mini-revelations simply confuse. The suspense bits are great, but horribly out of place, which makes one wonder why he didn’t just stick to what he was good at. Perhaps most telling is James Newton Howard’s score. His previous work for Shyamalan was brilliant, but here the music seems out of place and often completely at odds with the tone of the film – one wonders if maybe he had trouble comprehending the vision.

If Shyamalan hadn’t proved to be a bankable filmmaker in the past, I would almost be inclined to believe that the film had been chopped and reassembled by meddling studio hands, but that simply doesn’t seem likely with Lady in the Water. His previous films had a stunning clarity of vision which is sorely lacking as some freaky shit goes down in the world’s most multicultural block of flats. If you’re an avid fan of his it might be best to miss this one.

Lady in the Water