Animation house Laika continues to dazzle with their fourth feature, Kubo and the Two Strings. A fable set in ancient Japan, it concerns a young boy and his quest to locate a series of magical artefacts in order to fight an evil spirit that is threatening the townsfolk. 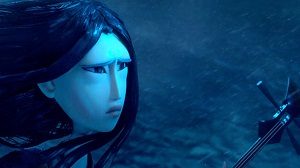 If that all sounds generic (or more specifically ‘Kung Fu Panda generic’) then fear not; I’ve deliberately kept my description vague so as to avoid spoilers. Because the story of Kubo is actually quite a complex one. This is a film that most definitely does not talk down to its audience, and indeed it might require a second viewing for me to take in all the nuance with regards to the subplots. Above all, this may be classed as a kids’ film, but it’s one that adults will definitely enjoy (and not for the usual reason, i.e. popping in some naughty humour that only grownups will get.) Even the very generic setup leads to some subtle subversions of the usual hero’s journey stuff. Just trust me when I say that this script is very, very solid.

Kubo and the Two Strings looks stunning. I shouldn’t expect anything less from Laika, who wowed me back in 2009 with Coraline, but even so, this really is a wonderful sight to behold. Every single frame is beautiful, every movement of the characters is incredible. I couldn’t tell where the stop motion ended and – what I can only assume is – CGI began. Dario Marianelli’s score is brilliant also, and you even get the bonus of Regina Spektor covering While My Guitar Gently Weeps.

Whilst the main character is a young boy, at least half the cast is populated by female characters, and they get the film’s most impressive moments. The voice cast are all excellent, from Charlize Theron to Matthew McConaughey, Art Parkinson to Brenda Vaccaro.

And herein lies the film’s only flaw. Laika made a film set in Japan, inspired by Japanese fables, populated by Japanese characters…and then cast a bunch of white actors to play them. It beggars belief. And no, casting George Takei and Cary-Hiroyuki Tagawa in tiny, inconsequential roles doesn’t make it okay. First off, how many people are actually going to see this film because Theron and McConaughey are in it? I didn’t even realise that was the case until I was halfway through the film. And secondly, there would have been a tonne of ethnically appropriate actors to choose from. This decision means that the gross smell of cultural appropriation hangs over proceedings…

Aside from that glaring flaw, Kubo and the Two Strings is an incredible film. At the end of the day, you come for the beautiful animation, stay for the wonderful story, leave disheartened by the casting.

Kubo and the Two Strings