This Spanish/French co-production concerns itself with a group of Middle Eastern men who invade a mansion in a gated community. A father (Fernando Cayo), mother (Ana Wagener) and their teenaged daughter (Manuela Vellés) are held hostage whilst the thieves demand money. That’s pretty much the entire plot of Kidnapped which, strangely enough, doesn’t actually involve kidnapping. 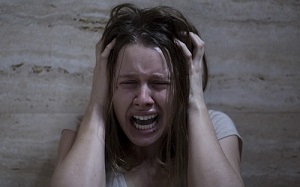 The most significant aspects of the film, however, are the extended takes we witness. Featuring some nifty Steadicam work, the film supposedly features only 12 shots, however it’s clear that there are a couple of edits snuck in when the camera passes through darkness. That being said, these lengthy shots are extraordinary – we travel through the entire (huge) house and even outside at times, and there’s often action happening in several places at once. The film opts for some splitscreen action at times also, à la Timecode or ‘24’, and considering the image has a rich golden sheen, it even resembles Sutherland’s long running TV show at times.

The technical aspects of Kidnapped are the most impressive because other than that, basically the film sucks. Realism is fine, but matters not one jot if it gets in the way of an entertaining film, and one and a half hours of screaming is frustrating, to say the least. The relentless cacophony meant that I started to resent the victims simply because they wouldn’t shut up, which is not something you should be feeling in a horror film. Even worse, the victims miss several obvious chances to get the upper hand, which is always exasperating in this post-Scream world.

It’s not just the victims that annoy – the criminals are also incredibly dim-witted. Whilst their initial assault on the house is clearly well-planned (especially considering the affluent neighbourhood they’re in, complete with security guard patrols), their scheme to extract money from the occupants lacks any common sense whatsoever. When things inevitably start to go south for them, their reactions are just as ridiculous.

Kidnapped tries to be downbeat and gritty, but it ends up being stupid and gratuitous. The film is constantly turned up to 11, lacking in the peaks and troughs that make for a good thriller/horror film, and the sheer idiocy of both the victims and the perpetrators meant I simply wanted the film to be over. This is the kind of film that reminds you just how good the likes of both Panic Room and The Strangers are. Aside from the notable camerawork, there’s nothing clever about this film. Kidnapped is a turgid, unwarranted feature that left me angry that I’d spent 81 minutes of my life watching it.