Mark Ruffalo is previously more well known for being the darling of the indie set – appearing in such films as We Don’t Live Here Anymore, My Life Without Me and Eternal Sunshine of the Spotless Mind – yet 2005 has seen him try to move to mainstream fare. He has starring roles in two romantic comedies, Rumour Has It and Just Like Heaven, following on from his surprise appearance in 2004’s Jennifer Garner failure, Suddenly 30 (13 Going On 30), but sadly none of these seem likely to raise his profile to that of A-list star. Ruffalo stars alongside Reese Witherspoon in this by-the-numbers outing, seemingly designed by a computer program such is the oh-so-tidy way every little thing fits together. It is an extremely competently written film, such that there is little wasted screen time – the problem with this is that you just know that every ‘insignificant’ comment or occurrence will later be important, so there is nothing left to the imagination. Nothing surprises, because anyone who has ever seen a romcom before will know well in advance where this is all heading.

The stars are adequate; Witherspoon clearly knows her way around a romantic comedy, and Ruffalo is capable of making a morose drunkard into someone you just want to hug. The chemistry between them is in short supply though, failing the ultimate test of romantic comedies – do you really want these two people to end up together in spite of it all?

The advance publicity made a lot of Jon Heder’s role in Just Like Heaven, but it is really no more than a cameo, which will disappoint the many fans of Napoleon Dynamite. There is nothing on display here to suggest he will have the charisma to carry another film as he did as Napoleon; it seems he may be someone remembered for one shining moment and then fading forever. Donal Logue, never famous for even one role like Heder, is lumbered with a poorly drawn sidekick character, and he never seems able to grasp what is being asked of him. In truth, his ‘Jack’ is a bit of a mess.

The soundtrack, direction, script… all are fair without being remarkable, and that basically sums up this film. Fair, but unremarkable. Never charming enough to make one ignore the robotic nature of its plotting, nor romantic enough to tug the heartstrings, Just Like Heaven may make for a quiet dvd at home, but not more.

What is Mark Ruffalo trying to prove? Rumour Has It, Suddenly 30 (13 Going On 30) and Just Like Heaven all feature the Ruffster having a go at romantic comedy and failing. Admittedly, these have been pretty poor films all round, but even so I’d expect more from him. Did you know there are a growing number of people out there who think he’s a crap actor? 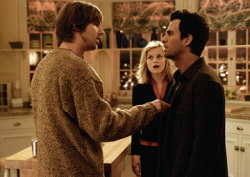 This is because they’ve only seen Romcom Ruffalo, not Indie Ruffalo, who up until recently strut his stuff in movies like Eternal Sunshine of the Spotless Mind, We Don’t Live Here Any More and You Can Count On Me. This is a sad state of affairs indeed.

Reese Witherspoon (The Importance of Being Earnest) has long been stuck in this genre, and she does an admirable job as always. The supporting cast also do fine, but Just Like Heaven is definitely a failure rather than a success.

I’m not entirely sure what is to blame – the premise, whilst unoriginal, should guarantee a decent (if less than challenging) 100 minutes. But somehow the pacing is stilted, the actors uncomfortable and the attempts at humour fail. There were many moments that should have been funny, but for some strange reason simply weren’t. Pratfalls are not Ruffalo’s strong point, but alas we have to witness him trying his best at physical comedy again and again.

The final act of Just Like Heaven makes you want to throw up, or at the very least groan in desperation. There’s nothing wrong with being tacky, or sickly sweet, as long as we actually care about the romantic leads. In Just Like Heaven I simply didn’t. It’s one of those films that I’m sure sounded great in the studio boardroom when originally pitched, but by the time it reached the screen something went terribly, terribly wrong.

←The Legend of Zorro Fun with Dick and Jane→