It Follows has a simple yet genius premise, and the less you know about it, the better. To briefly summarise without spoilers: nineteen year-old Jay (Maika Monroe) is being stalked by an enemy that is relentless and has the uncanny ability to hide in plain sight. That’s it. That’s all you need to know. Now go out and watch it. 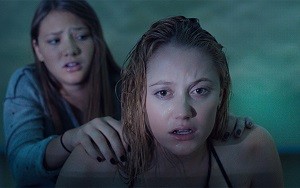 Still here? Okay then, well I could talk about how It Follows has echoes of both Ring (Ringu), A Nightmare on Elm Street and early 80s John Carpenter, but that would be pointless, since the level of originality on show here really is quite astounding. The film has fun by deliberately confusing us about the time period in which it’s set. Early on, it presents us with a cathode ray television screening a black and white film, a futuristic clam-shell shaped e-reader and Polaroid photographs. All the featured vehicles look like they’re from the 80s, yet all the cars in the background are present day models. Clearly, the filmmakers wanted to create a sense of timelessness about the film, and I think it works brilliantly. Hopefully this means that when it’s viewed decades from now, it won’t feel like a relic of its era.

Monroe is a fantastic lead. Poor Jay spends most of the film terrorised, yet I didn’t get sick of her wide-eyed horror. I sympathised and was desperate for her to survive. In what felt like a breath of fresh air for a horror film, her friends (Keir Gilchrist, Olivia Luccardi, Lili Sepe) immediately band around her; there are none of those frustrating moments where people think she’s going crazy. And it’s fantastic watching this band of young people try to outwit the enemy.

This is a scary film but there aren’t very many scares, if that makes sense. There’s an overwhelming sense of dread that hangs over proceedings however, and I was constantly in fear of what was about to happen. The score, provided by Disasterpeace, is clearly reminiscent of John Carpenter’s work, what with all the thick synth sounds, and complements the narrative perfectly.

Simply put, this is the best horror film I’ve seen in years. It throws our heroine and her friends into an impossible situation and keeps us on the edge of our seats for the entirety of the running time. Showing admirable restraint, It Follows also has an indie sensibility that you don’t often get in horror films. There are quite a few quiet moments in which Jay and one of her friends may share a look and nothing else. These brief pauses provide us with character depth that no amount of dialogue could achieve.

Confident, creepy and skilfully crafted, It Follows is a triumphant horror that both subverts and embraces the genre traditions, and a film that deserves to be remembered for years to come.

←X + Y The Spongebob Squarepants Movie: Sponge Out of Water→