Edward lives in a rather extraordinary household. His parents recently turned their humble abode into a nursing home, which means that ten year old Edward has not only been kicked out of his room, but has to share his living space with half a dozen elderly folk whose mental faculties are in varying states of decay. Surrounded by people reaching the end of their lives, Edward has some fascination of death – or more significantly, life beyond it.

Enter Clarence, one time stage magician and all-round bad tempered old man. Together the two of them form an unlikely bond, one that never attains any sense of equilibrium, but is strong all the same. 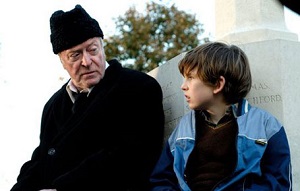 Is Anybody There? strikes a tricky balance. Its rather morbid subject matter means that any suggestions of sunshine and roses would be gauche, yet it manages to never become too depressing. Seeing Clarence grudgingly go along with Edward’s ghost hunting antics is sure to raise a smile, and though the two rarely ever see eye to eye there are a couple of beautiful moments when they do. The film only fails when it comes to Edward’s parents. Their relationship is on the rocks from the get-go, however the story eventually lays the blame on just one of them, which is a little simplistic, veering towards the offensive.

The film is set in the 80s, and thus can be summed up by three concepts – mullets, ‘Transformers’ and Back to the Future. The décor is as depressing as the house’s inhabitants, and just in case you were ever tempted to think that 80s fashions were cool, along comes a denim jacket. The cinematography is fairly basic but unobtrusive and Joby Talbot’s score is wonderful, hinting at ghostly theremins without ever getting that silly.

Part of the film’s charm is that Edward’s fascination of death mainly serves to anger or frustrate Clarence, who is all too aware of his impending doom and the failures he’s left behind. The pair can never really be a comfort to each other, but together they foster an understanding that is both melancholy and heart warming. Michael Caine is at the top of his game as Clarence. His performances in Christopher Nolan’s The Prestige and Batman films could be seen as carbon copies of each other, but it’s here and in films like Children of Men that he really gets to cut loose. Clarence isn’t the wise old sage with all the answers, but rather a cranky old man who is angered by his own mortality. Caine has the perfect match in Bill Milner as Edward, who manages to combine fear and optimism in every statement.

A beautiful and touching film.

←Four of a Kind Disgrace→