The Hunger Games films keep going from strength to strength with the impressive second installment, Catching Fire. Rumour has it that Gary Ross declined to direct this second installment due to the quick turnaround between films, and thus many feared a rushed sequel. Thankfully, Francis Lawrence’s film is practically the equal of Ross’. 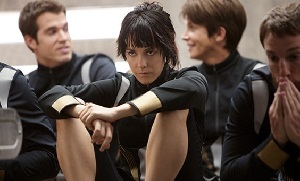 Though it’s been a year or two since I read ‘Catching Fire’, this film seemed to follow the book pretty closely. Of course, there are still scenes that don’t feature Katniss – something the book, being in the first person, never had – but they only ever confirm what was assumed by the reader, rather than filling in any gaps in the story. Katniss (Jennifer Lawrence), Peta (Josh Hutcherson) and even Gale (Liam Hemsworth) have becomes targets of the Capitol, and thus have to watch their every move. To her shock and surprise, Katniss has also become a hero of the people. As people die to her left and right, the significance of her survival becomes more important than ever.

Lawrence absolutely owns the part of Katniss, but we’ve known that since the first time around. Hutcherson has actually grown into the role of Peta – the first time around, he simply didn’t look old enough – whilst Woody Harrelson and Elizabeth Banks put in fantastic performances once more. Out of the newcomers, Philip Seymour Hoffman plays Plutarch Heavensbee as both ambitious and enigmatic, whilst we get to see a side of Jena Malone that we’ve never seen before. Perpetually bubbling over with rage, her Johanna Mason is both charismatic and unhinged.

Most importantly, Catching Fire makes a point of just how damaged all these people are. Katniss is still fighting nightmares from the previous year’s games, whilst even Effie (Banks) finds herself breaking down at the thought of what must be done. It’s this sense of despair that really resonated with me from the books, and it’s good to see that it hasn’t been forgotten in favour of kick-arse action.

Visually, the film looks stunning. There’s been a noticeable budget increase since the first, and I had zero complaints about the visual effects. The shakycam that some complained about last time seems all but absent, however there are a couple of action scenes that occur in the dark, which makes it a little hard to follow.

Those who don’t know should probably be made aware that Catching Fire is very The Empire Strikes Back; it’s a second chapter in a trilogy (well, quartet, but you know what I mean), and thus you shouldn’t go in expecting a film complete with closure. For all those fans of the books, I can’t really think of much to complain about with this adaptation. There are some brilliant performances backed by a brilliant narrative. Here’s hoping that the depress-a-thon that is Mockingjay turns out all right.