While Will Smith is (in my opinion) one of the most watchable film stars in the history of the medium, even his great skill can’t save a bad script and that is the plight that affects Hancock.

Smith is John Hancock, a drunkard with an attitude problem and a tendency to cause major public disruption. Oh, and he can fly, is bulletproof and has super strength. As the local superhero in Los Angeles he has a PR problem, with angry Angelinos unhappy at his performance and the DA wanting him arrested. When he saves the life of PR executive Ray Embrey (Jason Bateman) he might finally have an ally that can help him make the best of himself.

The first half hour of the film is its strongest – Hancock’s introduction is neat and the public reactions to his ‘heroics’ well managed. Later in the film, however, things go horribly wrong, with an ‘origins’ subplot that is overly mysterious and more than a little clunky, as well as difficulties with the characters that limit their appeal. The pacing is also problematic, with too long taken to get to the point for some characters while at other times too little is spent getting the story right. Hancock feels like a mishmash of ideas welded together that leaves obvious join marks at the edges.

Smith is adequate, although never shines as brightly as we know he can, while the supporting turn from Bateman is excellent. Ray is restrained enough to play straight man while having the strength to take charge of the situation, and although Bateman isn’t stretched he performs admirably. Charlize Theron seems a little bemused at times, perhaps mostly due to the plot contortions her character is forced to endure.

Long stretches of the film are shot with handheld cameras, and this again provides for a difficult viewing experience – The Kingdom, the last film from director Peter Berg, was similarly afflicted. There seems no point in complaining about this technique given its current ubiquity, however it is hard for many (not just myself) to accept that it adds to the sensation of ‘truth’ that is supposedly enhances.

One minor and two major stars in a Summer blockbuster superhero flick may well have seemed a no-brainer, but sadly that is also the result. Hancock promises much in its first section but is let down by inconsistency and several strange choices in plot, and just won’t stand up to scrutiny. Were there a bit more fun or excitement in the latter stages it may have gotten by, but as it stands it is pretty disappointing.

Hancock is a strange film, that’s for sure, and I’m starting to realise just how bizarre a talent Peter Berg is. Mention Very Bad Things and people either shudder at the memory or vehemently proclaim it’s one of the best films ever made. Welcome to the Jungle (The Rundown) was surprisingly entertaining, whilst The Kingdom started out average and ended with a bang. 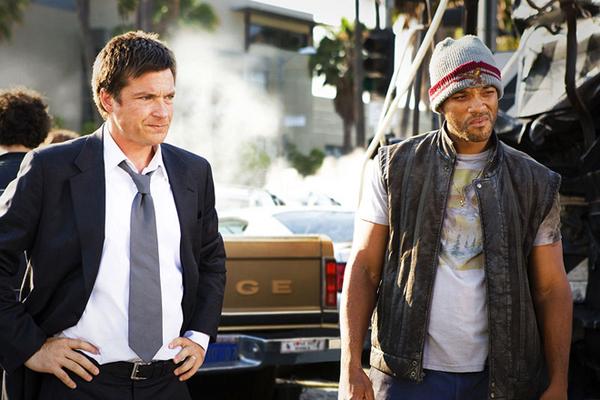 The latter shares more than just handheld cinematography with this one – Hancock is also not quite what we were expecting… Just when you think you’ve got the film pegged it moves into strange new territory, which makes for a curious flick indeed.

I can quite imagine many people would be angry with Hancock. It does seem to cheat the audience rather blatantly, almost poking its tongue out. It takes a while for us to realise that the film isn’t making fun of superheroes… it loves superheroes. It just has a roundabout way of expressing said love.

All things considered, it’s actually quite an effective ride, in the sense that it left me stunned. Berg is good at using action to induce emotion – the film’s most powerful moments are the ones when BIG things are goin’ down. Will Smith isn’t really at his peak here – Hancock comes across as too much of a dick, rather than an everyman-type character to which we can all relate. Jason Bateman fares better, though Ray Embry isn’t too far from Michael Bluth of ‘Arrested Development’, which is a pity considering the opportunity given to him in The Kingdom. Charlize Theron is good, though we all know that this sort of stuff is beneath her…

Objectively, the film is a mess. The narrative is unbalanced, full of plot holes and leaves way too many questions unanswered. But part of me enjoyed Hancock because it was such a strange beast. It left me confused and a little uneasy, the same way that the horribly flawed yet somehow fascinating cannibal movie Ravenous did. It’s not even a case of ‘what were they thinking?’; but rather ‘how did this movie get made?’

As a Will Smith movie, it’s probably even more disappointing. The promising I Am Legend suffered from a hideous re-shot ending, and Hancock doesn’t even show us a Will Smith that we like. If he doesn’t do a crowd-pleaser next time around, I can see his near-unbroken run as king of the box office coming to an end.