The Good Dinosaur is a film that neither hits the highs of Inside Out or Up, nor comes close to the low point that was Cars 2. 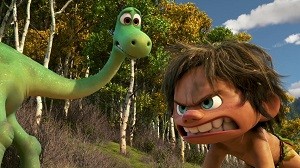 Aside from The Land Before Time – the film that spawned approximately 73 sequels – dinosaur animations are apparently tricky to get right. I’ve never actually met anybody who saw Disney’s Dinosaur back in 2000…and I’m not even certain if I’ve seen it myself. As far as I can tell, part of the problem has to do with nailing down the character designs. In Dinosaur, Disney went for a photo real look for the reptiles, compositing them with actual filmed locations. With The Good Dinosaur, we get photo real CGI landscapes coupled with comically designed dinos.

And when I say “photo real”, I mean this film will knock your socks off. I’d heard that the vistas were impressive, but nothing could prepare me for the image of a raging river, or wheat fields swaying in the breeze. I simply could not believe that I was looking at CGI. Regardless of the critical response to this film, we can be sure that it’ll be shown as a demonstration film in TV shops for years to come. Truly jaw-dropping, Pixar’s work on the scenery is stunning. The dinosaurs, however, are nothing to write home about. They look too similar to each other and they aren’t expressive enough for my tastes.

In broad terms, the story is nothing special. A young Apatosaurus called Arlo gets separated from his family and has to find his way back home. The distinctive part of the film, however, is that it features humans living alongside dinosaurs. The premise is this: what if the meteor that we think hit the Earth 65 million years ago missed, and dinosaurs continued to evolve? The film answers that question by suggesting that dinos would get smarter – indeed, they even farm – at the same time that primitive humans are merely grunting at each other. So: smart dinosaurs, dim humans. This premise is…interesting. It’s something we haven’t seen before, sure, but it could have been handled better. The miniscule amount of female characters is also disappointing, especially after Inside Out.

Despite all of the above criticisms, The Good Dinosaur often hits the right note. The significant moments are deftly handled, and there are some really emotional scenes that brought a tear to my eye. This is definitely a decent film…I just won’t be rushing out to watch it again. I’m sure the technological advances made during production will be worth it in the long run, but The Good Dinosaur is a middling effort from Pixar.

←When Marnie Was There Adventure Time - The Fifth Season Part 2→