At the risk of Mark making a big thing out of it, I’m kinda disappointed I didn’t get a chance to read Stieg Larsson’s book before seeing The Girl with the Dragon Tattoo. Murder mysteries are great but I’ve never understood how they can withstand repeat viewings/readings. Now that I’ve seen the film, I’m less interested in reading the novel.

So keeping in mind that this reviewer isn’t in a position to compare Niels Arden Oplev’s film with the source material, one may or may not be pleased to know that The Girl with the Dragon Tattoo is a great mystery film. There’s nothing particularly groundbreaking about it – this is a genre piece and something that, upon reflection, would have probably found itself on television rather than the big screen if the books hadn’t been so darn popular.

In fact, the film often feels like it was made for TV. The cinematography is good (if lacking in any flair) and more than once it felt like I was watching digital video rather than film. The long running time (152 minutes – which actually flew by) also made me feel that they must have considered making it a miniseries at one stage or another. That being said, The Girl with the Dragon Tattoo is engrossing viewing.

I quite enjoyed not knowing what all the fuss was about before sitting down to watch the film, but for those who care, disgraced journalist Mikael Blomkvist (Michael Nyqvist) is called upon by billionaire Henrik Vanger (Sven-Bertil Taube) to solve a 40 year old murder. The tale that follows isn’t the least bit tangled but the pieces are revealed in a gradual manner that keeps the viewer hooked. The eponymous ‘girl’, Lisbeth Salander (Noomi Rapace) is at first an anomaly but it was pleasing to see how her and Michael’s stories became entwined. She is quite a memorable character (less so Mikael, whose passivity is nevertheless a nice contrast to Lisbeth). The story veers into dangerous territory (crime fiction has a tradition of revelling in violence towards women) but manages to save itself – just. There are still lazy connections made between actions and reactions but for the most part, the film manages to at least address the more offensive aspect of modern crime fiction.

This isn’t a locked room mystery, nor are there many twists and turns – we have a huge list of suspects, none of which we get to know very well. Perhaps this is where the book was more comprehensive, but for my part I didn’t have any chance of guessing the ending because the film didn’t really provide any clues. I’ll be happy to be proven wrong, but it doesn’t seem likely that I’ll pick up anything on a second viewing (as opposed to ‘Veronica Mars’ for instance, which I recently re-watched.)

I’m hard pressed to understand why those who’ve read the book would want to see this film. The Girl with the Dragon Tattoo makes for great viewing if you’re going in ‘clean’, but I can’t imagine those who already know the ending (and have gone on to read the sequels) would get much out of it. I’m now going to have to make the decision as to whether I read ahead or simply wait for the sequel, The Girl Who Played with Fire (Flickan som lekte med elden), due out the end of this year (they’ve gone all Twilight on the franchise.)

When it comes to producing atmospheric and involving thrillers, there is a lot that some Hollywood filmmakers could learn from their European colleagues. Taking a book that has had phenomenal success and transforming it into a film is a big risk, and yet Niels Arden Oplev has created a highly enjoyable movie – albeit one that occasionally pushes the boundaries of taste.

After Mikael Blomkvist (Michael Nyqvist) loses a defamation lawsuit, he is forced to resign his post at a political magazine and await his imprisonment. 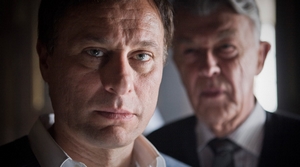 When he is contacted by rich industrialist Henrik Vanger (Sven-Bertil Taube), he is allowed a glimpse into the world of the rich and reclusive, as Vanger tells him of the disappearance and presumed murder of a beloved niece. Meanwhile, Lisbeth Salander (Noomi Rapace) is surviving (barely) on the fringes of society, using her skills as a computer hacker to investigate people for a security firm, and reporting to her state-appointed guardian. When their paths cross, Mikael and Lisbeth will form a deadly investigating duo.

When dealing with a film that started its life as a novel, there are rules that filmmakers appear obliged to follow that make the task that much harder than filming an original work: first, the fans won’t allow you to cut out scenes they loved, or modify the characters one little bit, so fidelity is your friend. Second, any surprises or twists from the book will be known in advance, so don’t be expecting to trick anyone watching your film. These ‘laws of conversion’ forget one simple fact: it is the filmmaker’s task to make an engaging and entertaining film, and, given the differences in the form, the film must be a different and distinct take on the story. Like Stuart, I have not read Stieg Larsson’s ‘Millenium’ trilogy, and thus cannot comment on the success of this conversion to the screen; however, as a film in its own right, Girl with the Dragon Tattoo, The is very good indeed.

A dim, foggy, isolated Swedish island seems the perfect setting for a story of internecine strife, and once the characters get to know the sprawling family and its history it will be impossible not to be engrossed in their story. Vanger is an ideal character to introduce the mystery to Mikael, and to form the film’s emotional heart, while the characters of Mikael and Lisbeth are given abundant time to find their feet. The isolation and sparcity of the setting is matched by Oplev’s unhurried direction, producing a sense of depth that is hard to define.

It seems to take a very long time indeed for the main characters to join forces, and it is perhaps in this regard that Oplev takes a slight misstep – that the novel is the first of a trilogy suggests it was important for the backstories of Larsson’s leads to be fully explored, however it is probably too long for a film adaptation. 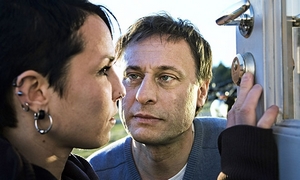 The film weighs in at 152 minutes (although there is a Swedish ‘extended version’ that ticks over to three hours!), and although the time flew and I barely noticed its largesse, a more judicious cut of the early sequences might have allowed for a tighter narrative to emerge.

The highly graphic and sexually violent nature of the early sequences that introduce Lisbeth to her audience will be hard for some viewers to take, although there is always a sense that the audience will get in behind Lisbeth as a result and will for her to succeed, and the events leading up to her meeting with Mikael go a long way to explaining her behaviour. Oplev walks a very fine line indeed, but, for this viewer at least, he manages to avoid gratuity.

The performances of Nyqvist and Rapace are excellent, bringing to life a pair of believable and intriguing characters with due subtlety and skill. They are surrounded by a supporting cast that is largely functional, and aided in their task by a crew that has done a wonderful job of creating the milieu for their story.

Girl with the Dragon Tattoo, The is a thrill for an audience uninitiated to Larsson’s story, and one hopes it will please fans of his novels. As always, however, the greatest effect will be for those unfamiliar with the source.