First things first: this remake is one of three major US projects that have been highlighted as prime cases of Hollywood whitewashing in the last couple of years. No matter the unique circumstances surrounding Doctor Strange, “Iron Fist” or this film, the end result is the same: Hollywood shies away from putting an Asian actor front and centre of big-budget productions, even those that necessarily call for such casting. This is a pity, and it needs to change. 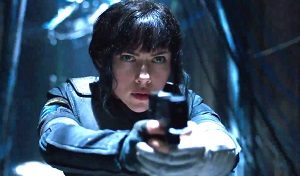 Putting that aside for the moment, Ghost in the Shell turns out to be a serviceable remake. Mamoru Oshii’s 1995 animated feature is a classic for good reason, but it’s never been perfect. A cold film that feels much longer than its 83 minutes, I’ve always appreciated that feature from afar. Now, 22 years later, director Rupert Sanders – along with writers Jamie Moss, William Wheeler and Ehren Kruger – have made all the sorts of changes you’d expect from a Hollywood remake. Namely, the characters are more sympathetic, the story simpler and the ambiguity dropped almost entirely.

And even so, it works. This is a bold cyberpunk vision that duplicates the animated original as much as that film borrowed from Blade Runner. There are entire sequences that have been lifted from the original, but they occur at different times in the film, with the filler scenes in between differing greatly. In that respect, it’s a remix of the anime.

Johansson is great as the Major, and whilst I disagree with the Hollywood Powers That Be, who clearly think she is the only female who’s allowed to open a $100+ blockbuster, she gets the job done. In a bizarre case of rainbow washing, they’ve surrounded her with a Danish man (Pilo Asbæk), a Singaporean man (Chin Han), an British woman (Danusia Samal), and a French woman (Juliette Binoche), not to mention Japanese living legend, Takeshi Kitano. I was expecting some kind of explanation as to why future-Japan is incredibly multicultural, but none was forthcoming. Peter Ferdinando’s Cutter was the only real weak link in the casting for me – he’s a moustache-twirling bad guy from the word go, and this never changes.

The working relationships between this group of people is one of the film’s strong points. Whereas the animated film emphasised the friendship between Batou (Asbæk) and Major, here I really felt the bonds between everyone in Section 9.

The art direction is stunning. The visual effects vary from the iffy to the sublime, whilst the action scenes are well-shot, if brief. Running to a brief 107 minutes, the film is a welcome respite from those blockbusters that are all longer than two hours.

I’ve never read the Manga, but I think it’s safe to say that this adaption is as shallow as the 1995 animation was. For those who love the 90s film and think the concept of a Hollywood remake is sacrilege, this film won’t change their mind. I, however, didn’t mind this. It’s a competently made sci-fi action film that presents us with a compelling futuristic vision.

Ghost in the Shell