It’s hard to say no to another Tom Running Really Fast movie. Because, as we all know, that’s what Tom does best. (Apart from when he actually takes a risk, which has only really happened twice in his career.) Edge of Tomorrow is yet another case of Tom getting his run on, and an incredibly enjoyable film. 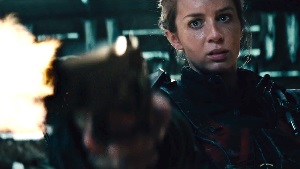 Set some time after an alien threat has shown up on Earth, Edge of Tomorrow sees Cruise playing Major William Cage, an officer with the UDF who’s well-versed in company PR but not so much in combat. When he finds himself in the middle of a warzone, he discovers not only that he is the key to wiping out the alien threat, but that the personal cost will be unimaginable.

As a science fiction film, Edge of Tomorrow presses all the right buttons. It’s Groundhog Day meets Steins;Gate meets Tom Running Really Fast. As far as mainstream Hollywood action fare goes, it’s a film that could have been rather complicated, but the script and/or editing has the concept honed to perfection. Audiences are pretty savvy with high concept sci-fi these days (arguably thanks to The Matrix, which brought such geeky ideas to the mainstream) and Edge of Tomorrow never spends too long on exposition. The film moves at a cracking pace, and it’s astounding just how much work must have gone into it.

The visual effects are…well, they’re not convincing all the time, or even much of the time. But when you consider what the filmmakers are doing with the medium, it’s quite incredible. I can’t begin to imagine how much pre-production and post-production must have gone into creating Edge of Tomorrow, but suffice to say that every single exterior, and many of the interior, shots involve heaps of digital trickery.

Cruise does a good job, as always. He gets a decent character arc to play with too, something which is often forgotten in big budget movies. Emily Blunt is exceptional, and she is buff enough in the film to almost make us believe she could wield a giant f*ck off sword the way she does.

The sword is a reminder that Edge of Tomorrow is based on a manga property (‘All You Need is Kill’). I’ve heard several comments lately that Hollywood is on the cusp of adapting Japanese comics in a big way, and I wouldn’t be surprised if manga/anime adaptations become as ubiquitous as the Western comic book movie. Perhaps this is why James Cameron has taken so long to get around to his Battle Angel Alita movie; he’s waiting until the market is ready.

Whilst it is a similar film to Oblivion, I actually enjoyed this one more. Oblivion was solid, if extremely derivative, entertainment. Edge of Tomorrow on the other hand features a couple of massive plot holes, but it doesn’t matter too much when the film is so darn fun. Easily Doug Liman’s best film since The Bourne Identity, it isn’t afraid to make fun of itself, and is surprisingly comedic – dare I say slapstick – in places.

By no means a flawless film, Edge of Tomorrow gets so much right that you can’t go past it for a solid two hours’ entertainment. The science fiction premise is there, the rollicking action is there, and the strong performances keep the whole thing grounded. Above all, it doesn’t waste a single minute of screen time.

←Under the Skin The Rover→