That this movie exists at all is testament to the tenacity of producer/star Ryan Reynolds (who’s been officially attached to the character since 2004) and the various writers and directors that have been associated along the way. Consider this: we’ve already seen a version Deadpool, played by the same actor in X-Men Origins: Wolverine, and it was universally loathed. That the creative team got a second bite of the cherry is extraordinary, even in a world where Spider-Man gets rebooted every three months. 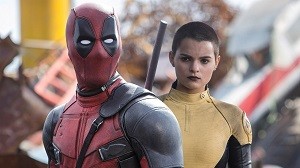 What’s even more surprising is that fact that they got to release an R-rated (our MA) superhero movie in this current climate. Understandably, the budget is a lot smaller than your usual comic book movie (around $58 million, though they seem to have spent a lot more than that on advertising if Melbourne is anything to go by), but after several false starts, fans finally have a Deadpool movie that at least tries to mimic the comics.

I say try, because at the end of the day, the film’s a lot more generic than I expected. Sure, the ultraviolence, fruity language and generous crassness abounds, but the story itself is quite straightforward. We get an origin story via flashbacks, one that makes clear that the events of the first Wolverine movie are no longer canon. Well, sort of. Who knows? For some reason Fox can’t manage to create an X-Men timeline and stick to it, so at this point hoping for the least bit of synchronicity is a hopeless endeavour.

At the end of the day, however, this is superhero 101 stuff. I’ve only read a few ‘Deadpool’ graphic novels in my day, but his storylines are usually non-stop zany action scenes that barely pause for breath. Clearly the filmmakers were restricted by their budget here, but I’m still not sure we needed the film to spend so much time with Wade Wilson backstory. Do people come to a Deadpool movie wanting to care about the characters? I’m not sure…

Fox have proven time and again that they can’t make anything more than a mediocre superhero movie. When was the last time they actually stunned audiences? X-Men 2? For a moment there, First Class seemed to have righted the ship, but then along came the ever-so-dull Days of Future Past. Here we have another mutant entry that is perfectly acceptable, but it’s never side-splittingly hilarious nor as shocking as it thinks it is.

Reynolds is great in the role – but then again, he was great in Green Lantern too, even if the film was rubbish. Morena Baccarin excels also, even if there’s nothing particularly challenging to sink her teeth into. A couple of mutant supporting characters nearly steal the show, and it’s good that the film doesn’t take itself too seriously. At the end of the day, this certainly makes up for the previous attempt at a cinematic Deadpool, but it’s far from brilliant.