This film is basically a patchwork of short films connected by a few recurring themes, the most obvious of which (unsurprisingly) is the presence of caffeine and nicotine. 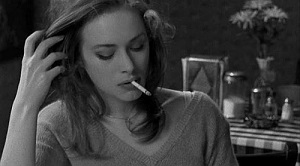 Jim Jarmusch’s film has its fair share of highs and lows – at times brilliant, at times tedious. The highs include Cate Blanchett’s segment, and Alfred Molina and Steve Coogan’s appearance (which really deserves to be a short film in its own right). Other appearances are quite disappointing (GZA, RZA and Bill Murray, Steve Buscemi) and some have potential but feel a bit flat (Iggy Pop and Tom Waits).

It could be said that Jarmusch is working at a ‘breakneck pace’ here – at least compared to his usual works such as Ghost Dog: The Way Of The Samurai and Dead Man. The film does tend to stumble a bit towards the end when we’re subjected to some repetition. Rather than tying it all together, this technique seems to suggest that he ran out of ideas.

This is the type of film where you have to consciously ignore certain failures including boring cinematography and bad continuity – and I did this with pleasure. Although, if I can’t treat it like a normal film, I find myself wondering on exactly which merits I should base my opinion of Coffee And Cigarettes?

I don’t really have the answer to that question, unfortunately… So I’m just going to have to content myself by saying that this is a pleasant hour and a half’s romp. You’re bound to smile, sometimes chuckle, but it’s definitely nothing that will change your life.