I know, I know… I’m still reviewing MIFF 09 films and it’s almost a month after the fact. But I simply couldn’t leave this one out. 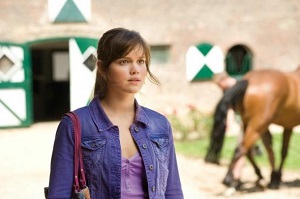 Whilst American cinema seems to be distinctly lacking in good films aimed specifically at teenaged girls (don’t even mention Bratz or any Pants-related dramas), Europe seems to have the situation under control. Well, that is if Show Me Love (Fucking Åmal), Angus, Thongs and Perfect Snogging, Triple Dare (Supervoksen) and now Cheeky Girls are anything to go by.

Ute Wieland’s film focuses on three best friends, Hannah (Selina Shirin Müller), Mili (Emilia Schüler) and Kati (Henriette Nagel). Hannah’s a gifted singer whose boyfriend wishes she were more sporty, Mila’s got a serious crush on the new teacher whilst Kati is livid that spunky Brian shows more interest in Mila than herself. It’s all very boycrazy, which is fair enough given the ages of the girls. The film is quick paced, full of gimmicky editing and has animated versions of the central characters introduce each ‘chapter’ of the film.

What’s so wonderful about the film is exuberance on show. The characters may forever be traversing an emotional minefield but the film is filled with a light-hearted sense of humour. It perfectly captures the silliness of teen angst but treats it with respect at the same time. In doing so it manages to avoid talking down to its target audience.

The film is based on the ‘tween’ series of books by Bianka Minte-König and the central performers bring the characters to life brilliantly. Schüler is fantastic in the lead roll – Mili is the perfect balance, strong willed and intelligent yet forever daydreaming. The only real flaw with the script is that she at times seems a little too flippant with her affections. Müller steals the show as Hannah, however. Her punk rock stylings are matched by an edgy and perfectly expressive performance. She’s bound to go far. Nagel is a little overshadowed by these two, though Kati isn’t given a fair go by the script – she feels whiny and shallow by comparison.

I wish we’d see more films produced like this in Australia (well, I wish we’d see more films produced in Australia full stop). We kick arse when it comes to kids’ television, but I have yet to see this carried over to the silver screen in any big way. Whilst flicks such as The Black Balloon and Clubland are impressive in their own right, they are quite focussed on ‘issues’ or too caught up in ‘being Australian’. It’d be nice to have a fun, teen flick like this that may seem flippant but is quite moralistic and instructive at the same time.

←The Ugly Truth The Girlfriend Experience→