When it comes to great stories about heroic Aussie soldiers in the First World War, there aren’t many that can top that of Beneath Hill 60. David Roach’s screenplay is based on Captain Oliver Woodward’s diaries of his time in charge of a group of tunnellers in France and Belgium in 1916, and their task of undermining and destroying entrenched German positions from beneath.

When Oliver Woodward (Brendan Cowell) hears that the Armed Forces are recruiting men with mining and engineering backgrounds for a special task, he doesn’t hesitate to sign up and ship off to France. He leaves behind a young woman he is determined to marry on his return home, and meets up with the 1st Australian Tunnelling Company, who have been digging passages under enemy lines. After early success, Woodward and his men are charged with destroying a German machinegun post on Hill 60 in Belgium, a notorious battleground with a reputation for massive loss of Allied life.

The most striking and successful aspect of Beneath Hill 60 is the production design and cinematography that brings the experiences of the tunnellers to life. The claustrophobia of being at war in such confined spaces is amplified by the danger of imminent discovery by Germans tunnelling in the opposite direction, or from collapse and suffocation under piles of dirt and rubble. The film succeeds in conveying this tension incredibly well, and much of the enjoyment of watching the film comes as a result.

It is in the above-ground action that Beneath Hill 60 waivers, predominantly in the flashback sequences that detail Woodward’s life just prior to volunteering for war. These flashbacks seem to break down the tension and lessen the effect of the film: while sometimes an intense and claustrophobic thriller will benefit from the pressure valve being released momentarily, in this film the result is unfortunately the opposite. Additionally, some of the war sequences are staged in such a way that most audience members should be able to predict the outcome for various characters, and this is a shame as the production design deserves better.

Beneath Hill 60 is also diminished by its reliance on the stereotypical portrayal of the British as pompous buffoons who should be grateful for Australian assistance, and Australian officers as being incompetent and callous. Chris Haywood’s turn as Colonel Wilson Rutledge, for example, borders on the ridiculous, and his scenes are some of the film’s weakest. One has to wonder what it is about our culture that we must sink the boot into our Allies every opportunity we get, with Australian war films almost invariably making out our soldiers to be the greatest warriors the world has known, and all others to be bungling goons. It seems hard to believe this is the entire truth of the matter.

Although rife with ANZAC cliches and betrayed by an unfortunate reliance on making others look silly to make our own look good, Beneath Hill 60 achieves its aim of bringing attention to the role of Australian tunnellers in the First World War, and the incredible (and incredibly dangerous) conditions they were forced to endure. That this viewer wants to read more of the actions of these men and the attack on Hill 60 should be recommendation enough.

This is actually one of the best war movies I have ever seen. Beneath Hill 60 blends together tension, excitement, shock and horror perfectly. It’s astounding that this film manages to be nostalgic for the camaraderie and yet at the same time be a shocking indictment of war. One moment we’re excited to see an offensive succeed with a bang, the next we’re shocked at the loss of life. The very best scenes are a perfect blend of both at the same time. It’s never patronising nor does it push any all-too-obvious morals on the audience.

The film looks great, it really does. Of course, the production cheats here and there (lots of high/low angle shots so we don’t see a modern horizon, digital backgrounds) but the production overall is stunning. 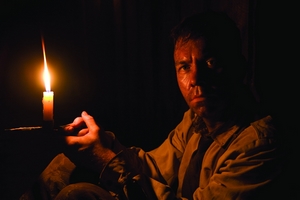 I was in two minds about Cezary Skubiszewski’s score. It is at times brilliant – the grand, sweeping tunes perfectly accentuate the film’s best moments – but once or twice it was actually distracting.

I’m quite surprised that Mark didn’t like this film more. Yes, the film has the commanding officers on both sides make stunning errors of judgment. I thought the film was perfectly balanced and let us sympathise with the our enemies as much as the Allies. One also has to consider that this is told from the perspective of the miners-turned-soldiers, so it’s quite conceivable that a: they would feel that their commanding officers had no idea what they were doing and b: their commanding officers would be unwilling to trust in those with relatively little war experience. With regards to the flashbacks, I also disagree with Mark. I actually really enjoyed these scenes and did find them a welcome reprieve from the tension and a useful device in a film that is primarily episodic in nature.

It’s a stunning story, and I’m surprised it hasn’t been filmed before (someone may correct me if it has). The claustrophobia is palpable – every scene you’re aware of just how precarious our unfortunate characters’ situation is.

Brendan Cowell again puts in a great performance. He’s becoming quite Mendelsohn-y, so regularly does he appear in Aussie films. I suppose he doesn’t have quite the chiselled jaw for Hollywood, but then again Sam Worthington hasn’t yet made any particularly noteworthy impression with his chin in American films yet.

There are only a couple of quibbles I had with this film. The first was the almost flawless score whilst the second would be some of the narrative choices – namely, who lives and who dies. The film comes close to cliché once or twice, though consistently succeeds in having you close to tears or alternatively on the edge of your seat as required.