To say Edgar Wright’s fifth film was hotly anticipated would be an understatement. His last feature, The World’s End, was back in 2013. His next film should have been 2015’s Ant-Man, but he left that production after eight years of development, leaving Peyton Reed to step in. After the release date shifted several times, we finally have Baby Driver. And, quite frankly, it wasn’t worth the wait. 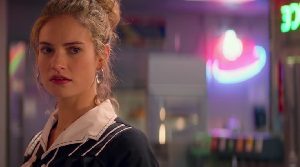 Ansel Elgort plays Baby, a young getaway driver working for Kevin Spacey’s crime boss, Doc. iPod perpetually playing in his ears, Baby’s as passionate about his music as he is about driving. And Baby Driver opens with an incredible car chase. There’s no denying Wright’s talent behind the camera – such incredibly precise cinematography, editing and music – and whilst we already knew he was great at capturing fight scenes, this is the first time we’ve really seen him let loose on a car chase. Hot Fuzz‘s two-minute chase scene pales in comparison.

Unfortunately, it’s all downhill from that point. For Baby Driver features some of the most generic and clichéd plotting of any film I’ve seen this year. Here’s the crook with the heart of gold, surrounded by tough gangsters. Enter the beautiful damsel, who apparently has nothing going on in her life – she’s just been waiting tables, biding her time for her One True Love to turn up and whisk her away.

And it’s not that any of this doesn’t work. Elgort and Lily James have incredible chemistry. And they’re surrounded by a top-notch ensemble – Spacey, Jon Bernthal, Jon Hamm, Jamie Fox, Eiza González and Lanny Joon are all excellent. But none of them can escape the fact that we’ve seen this film 100 times before.

And that’s before I even address the fact that Wright’s script fails to create any unique female characters. James and González are the only women on screen of note, and it’s clear that they conform to the tried-and-true innocent/fallen woman binary. The film features over half a dozen over-the-top gangsters with silly gimmicks, but for some reason Wright didn’t see fit to make any of them female. Most significantly, the entire film hinges on the idea that this young man (boy, really) isn’t the type you’d expect to be a kick-arse getaway driver for a collection of crooks…so why couldn’t this have been a young woman?

Even if that kind of thing doesn’t bother you, I’d be surprised if Baby Driver was impressive enough to be worth your night out. Even the climax doesn’t provide us with the incredible action scene I was hoping for.

Technically speaking, Wright is at the top of his game. This film is constructed with incredible precision, and the direction is on point too. It’s just such a shame it’s wrapped up in such a banal story. Wright needs to really push himself with his next film, perhaps by getting himself a writing partner…