Based on the highly praised novel ’48 Shades of Brown’ by Nick Earls, 48 Shades attempts the difficult task of delivering the depth of character possible in a piece of writing, in the limited time allowed for a feature film, and sadly comes up short. 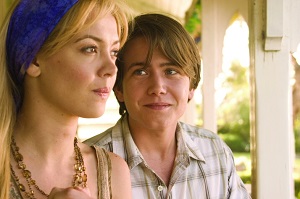 The players in Earls’ novel are so well drawn, their romantic struggles and emotional growth are involving and easy to relate to. In 48 Shades, so much of the character information is compressed (as it must be in this form), and the audience is left caring less for the heroes than is necessary for such a character driven film. Many of the highlights of their original illustration are transferred to the screen, but somehow they each seem less significant, almost as if it was felt necessary to include them but not to allow them their true worth. Moments like the picnic between Naomi and Dan in which they discuss the eponymous colours; the ‘pesto incident’; the revelation of the direction in which Jacq’s feelings lean towards the end – each scene is important and yet they seem less worthy as presented on film.

Robin McLeavy certainly must bear no responsibility for the overall failure of 48 Shades – her turn as Jacq is marked by a charismatic presence and competent performance. McLeavy is just right, and leaves Richard Wilson and Emma Lung disappointing in comparison. Lung, who was excellent in 2005’s Peaches, just doesn’t quite strike the right notes as the new-age Naomi. Dan, the focus of this film about finding out about oneself and life in general, needed to be far more appealing than the fairly uninspired performance Wilson provides. He is vaguely entertaining, but is provided with little in the way of struggle or conflict to stretch him, and eventually comes off only as dull. Nicholas Donaldson (and probably director Daniel Lapaine) is responsible for turning the character of Chris Burns into someone completely appalling and instantly unlikeable, diminishing the impact of Daniel’s own coming of age by making his youthful past seem so unpleasant. Victoria Thaine also makes a brief appearance, almost unrecognisable after her role in The Caterpillar Wish.

The soundtrack, filled with works by Australian artists, is certainly lively enough, and features several highlights including Lior’s ‘Daniel’, although why it was felt necessary to so frequently use slo-mo and montage is not clear. Lior’s song may have been perfect accompaniment for footage more substantial than it was afforded.

48 Shades is never frankly bad, however its failure to achieve any depth of character means it is a poor substitute for Earls’ novel. Charming in moments, and featuring what may be a break-out performance for Robin McLeavy in her first feature film, there may be some enjoyment to be found for those unfamiliar with the source only.