Upon completion of the Fullmetal Alchemist journey, it’s easy to see why the property has prevailed. Two different anime adaptations and one live-action adaptation of the manga are testament to its strength. The best part is that, much like Attack on Titan, Fullmetal Alchemist: Brotherhood doesn’t fall into many of the traps that other shōnen manga stories do. 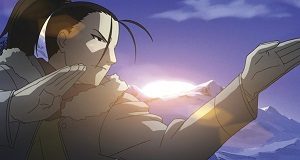 By the time you start part two, you’ve already had 35 episodes to gather a vast array of characters, many of which are kick-arse, unique heroines (who rarely, if ever, need saving – a shōnen rarity, in my experience.) Top of this list would be Izumi, teacher of the Fullmetal Alchemist. Despite being a powerful alchemist and martial artist, she constantly refers to herself as a housewife, and only ever seems to wear toilet slippers, like she just left the house in a hurry. There’s Riza Hawkeye, a sharpshooter in the military who serves under Colonel Roy Mustang; Lan Fan, masked bodyguard to Lin Yao; and May Chang, a young princess of Xing. All of them have depth, are capable and have their own ambitions. Last but not least, we have Olivier Mira Armstrong, Major General at the Briggs Fortress, which looks more than a little bit like the Wall in ‘Game of Thrones’.

And at this stage of the plot, it’s the supporting characters that really come to the fore. We know all about Ed and Al’s personal goals, and the evil plan that they need to thwart along the way. All that remains is a resolution of such things. And boy – does Brotherhood do its best to provide a suitably epic conclusion to the saga. The climax of the story, believe it or not, takes place over 18 episodes, give or take. It’s truly stunning just how many pieces are on the board at this point, and how deftly the series hops from plotline to plotline, all whilst keeping the same sense of impending doom hanging over our heads. That the pacing never slips up is remarkable.

The only disappointing part of all of this is that the final two episodes are…fine. Just fine. I didn’t sit back and think, “wow, the end of the story really knocked it out of the park” a la Steins;Gate, but neither was it disappointing.

As an action show, Brotherhood never fails – I regularly marvelled at its ability to up the ante – and the quality of animation, the music and the acting all contribute to slick piece of storytelling. 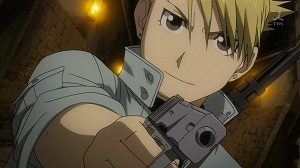 There is less philosophical musing in this half of the story – whether that be concerned with the repercussions of civil war, or the moral implications of trespassing God’s domain through alchemy – but that’s to be expected, I guess.

This collection includes the four OVAs, each of which are only 15 minutes long. These are one-off side stories that either take place before or during the bulk of the series. Out of the four, three are excellent (particularly the one focussing on Izumi) and one is a strange misfire. They are definitely worth watching, particularly if you want to go back to the simpler times, when the fate of the world wasn’t hanging in the balance. It’s much like those who prefer the simpler, story-of-the-week episodes that featured in seasons 1-3 of ‘Buffy’, before it became quite so epic and arc-focussed.

That Ed and Al are the least interesting part of this concluding half of Brotherhood is the only sticking point. It didn’t bother me much because the supporting cast are so fun, but I can see others finding it frustrating.

That we can see the entire series, from start to finish, in two huge box sets is a blessing. It’s a marathon, but it’s one worth setting out on.