I’ve been seeing cosplayers wearing uniforms from Attack on Titan at conventions for the last couple of years, and was amazed at how much of a breakthrough hit this show has been. It’s the type of anime that has a much broader audience than usual, so I was fascinated to see what was so special about it. After binge-watching Collection 1 in a couple of days, I can see what all the fuss is about… 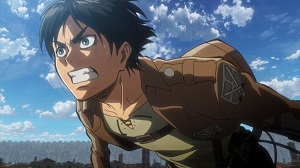 Attack on Titan is set in a vaguely medieval world that may or may not be a post-future Earth. Humanity lives within one giant city surrounded by 500 foot walls. The stone barriers are there to fend off the titans, who appeared without warning a century earlier. Gigantic naked humanoids, these creatures are only interested devouring humans, and there’s nothing creepier than seeing these gigantic, genital-less mute behemoths towering over our heroes, a blissful glint in their eye (except, maybe, if they did have genitals).

Eren (Yûki Kaji), Mikasa (Yui Ishikawa) and Armin (Marina Inoue) are three childhood friends who join the military in an effort to thwart the titan menace. Eren is the most single-minded of the bunch and, if we’re being honest, is of the Shenji mold (à la Evangelion 1.0: You Are (Not) Alone), in that he constantly dials the intensity all the way up to 11. Eren does a lot of yelling, but thankfully stops short of becoming tiresome. The other two provide some balance. The quietly-spoken Mikasa is the most capable of the new recruits and a fearsome warrior, whilst Eren is the smartest of the bunch, even if he’s a bit of a wimp. The three of them make for a great central triptych of characters.

There are a host of supporting characters, all with their own visual quirks, so they’re easy to tell apart, even when they’re wearing identical uniforms. My favourites would have to be Sasha (Yu Kobayashi), who’s more than a little strange and overly concerned with food, and Levi (Hiroshi Kamiya), the enigmatic leader of an elite squad.

The production values of Attack on Titan are quite incredible, and look amazing on Blu-ray. The soldiers use their omni-directional mobility gear to fly through the city streets, and those sequences recall the high-flying moments of The Amazing Spider-Man, ‘Assassin’s Creed’ or ‘Arkham City’. In such instances, the buildings are usually rendered in 3D animation whilst the characters remain in 2D. 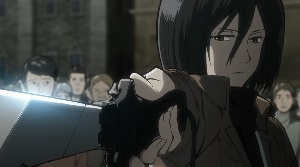 They are fleeting moments, however, and it’s quite common for an episode to feature still frames for the occasional crowd scene, presumably to keep costs down. It works, however one wonders if spending less on the high octane moments would mean we could lose some of these static shots.

The main problem with Collection 1 is that the characters are prone to bouts of extended introspection. I’m all for character development, but this can slow down the narrative unnecessarily. It’s a case of telling, not showing, and I suspect it too has to do with keeping the budget at a manageable level.

The brilliant thing about Attack on Titan though is this: no longer has it set up the rules, than it breaks them. With impunity. The show took me completely by surprise on several occasions, something that hasn’t occurred since Blood-C, and its ability to do narrative about-turns with such ease is unparalleled.

When you get down to it, this really is your traditional Kaiju versus humans setup, except the monsters are simply giant versions of humans. There’s something undeniably unsettling about these titans, however, and as such, Attack on Titan sends Godzilla back to the Pacific Rim from whence he came.

Attack on Titan Collection 1 is available now on Blu-ray and DVD from Madman.

←Dawn of the Planet of the Apes Reaching for the Moon→